Baked Fish Tacos are an easy, healthy taco recipe that’s ready in less than 20 minutes. They’re baked, not fried, and topped with coleslaw veggies and a creamy homemade cilantro dressing.

This shop has been compensated by Collective Bias, Inc. and its advertiser. All opinions are mine alone. #MazolaHeartHealth #CollectiveBias 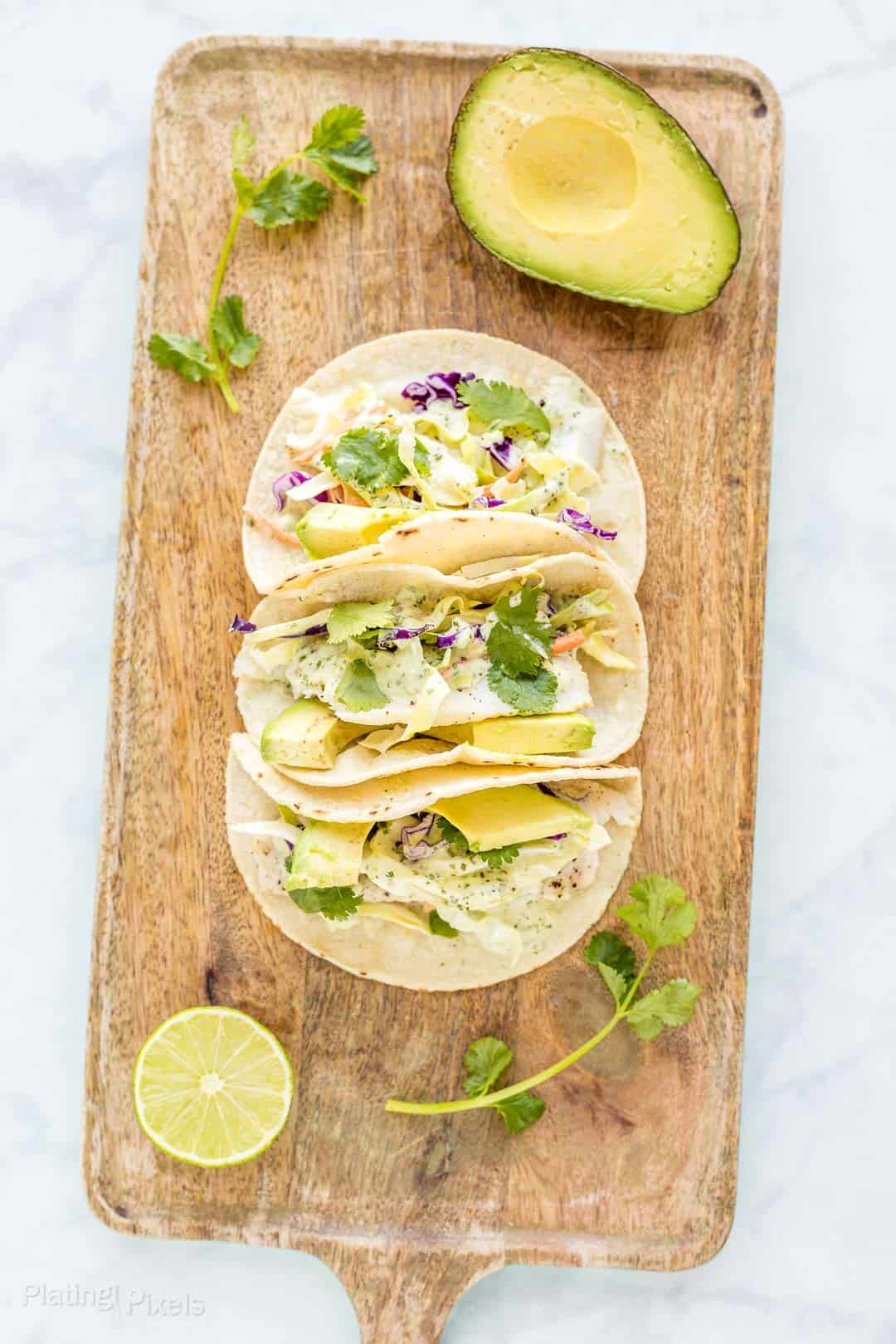 Fish tacos are one of my favorite Mexican foods. It’s an easy way to get more fish into your diet. However, fish tacos aren’t so healthy if breaded and fried. I’ve done a few tweaks to make these more wholesome, including skipping the breading and baking the fish.

They’re also topped with a homemade cilantro dressing that includes yogurt instead of sour cream.

The best fish tacos I’ve ever had were in Belize. They were fried and topped with a creamy mango sauce. I wanted to make something similar at home, but healthier. These Baked Fish Tacos with Cilantro Dressing are lightened up yet loaded with flavor. 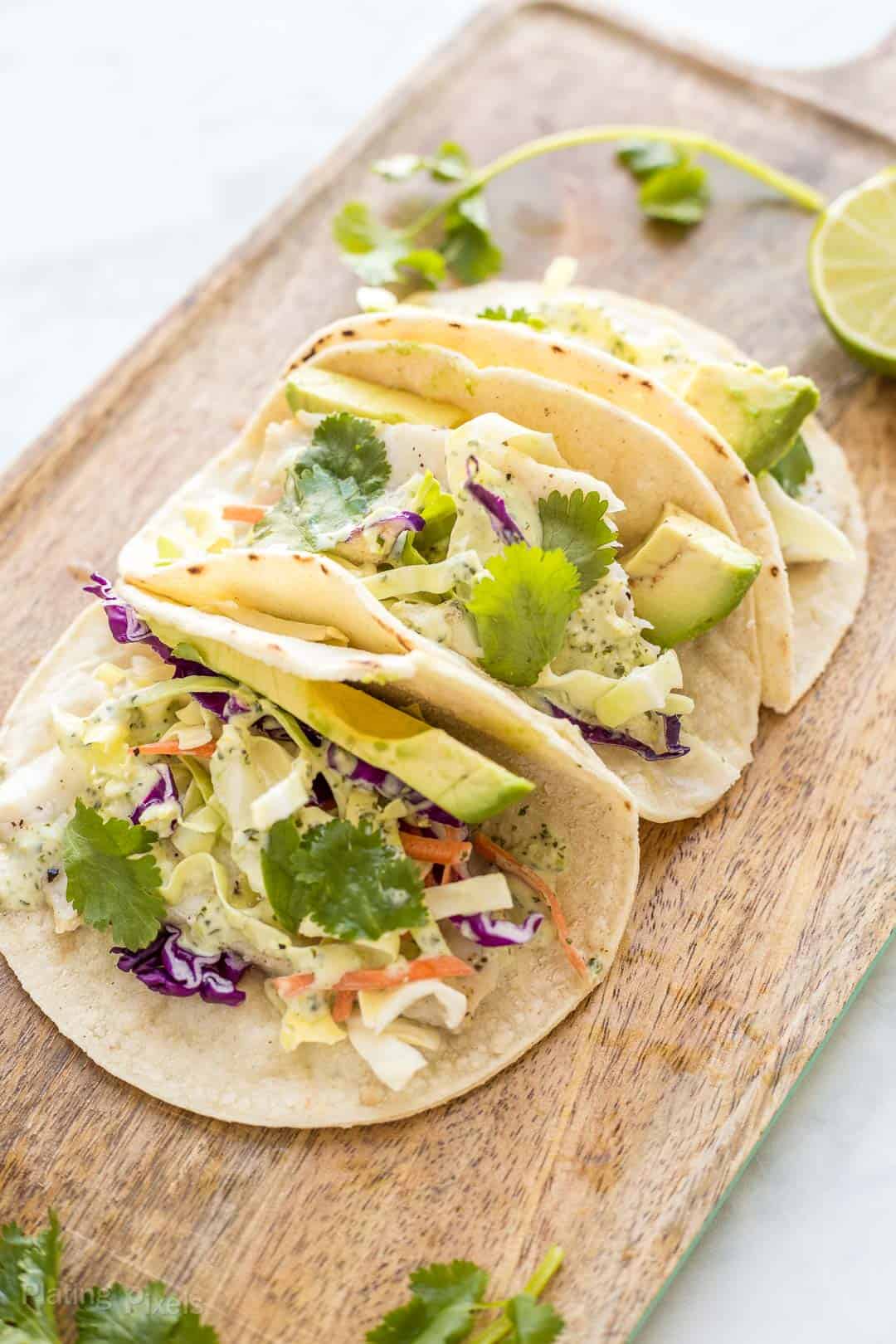 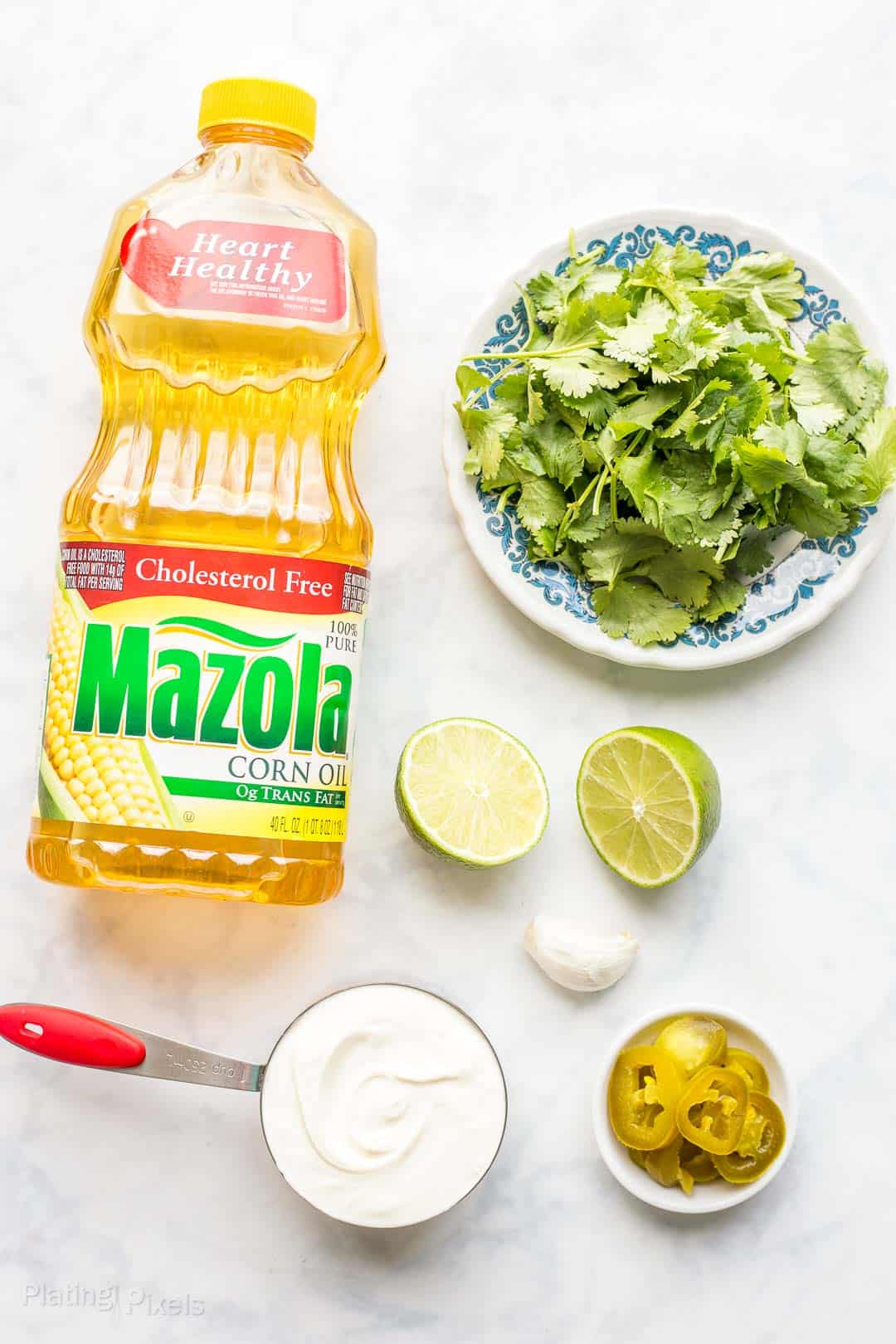 Fish: You can use a wide variety of fish, including tilapia, cod, sole, salmon or tuna. For this recipe, I used tilapia since it’s a versatile fish with a mild flavor.

Veggies: Coleslaw mix (without the dressing) is perfect for fish tacos. It usually includes carrots and green and purple cabbage. It’s pre-shredded for an easy topping.

Tortillas: Use any tortilla you prefer, such as corn, small flour tortillas or low-carb tortillas.

Dressing: Fish tacos include some sort of dressing. Usually, it’s a creamy sour-cream based dressing. 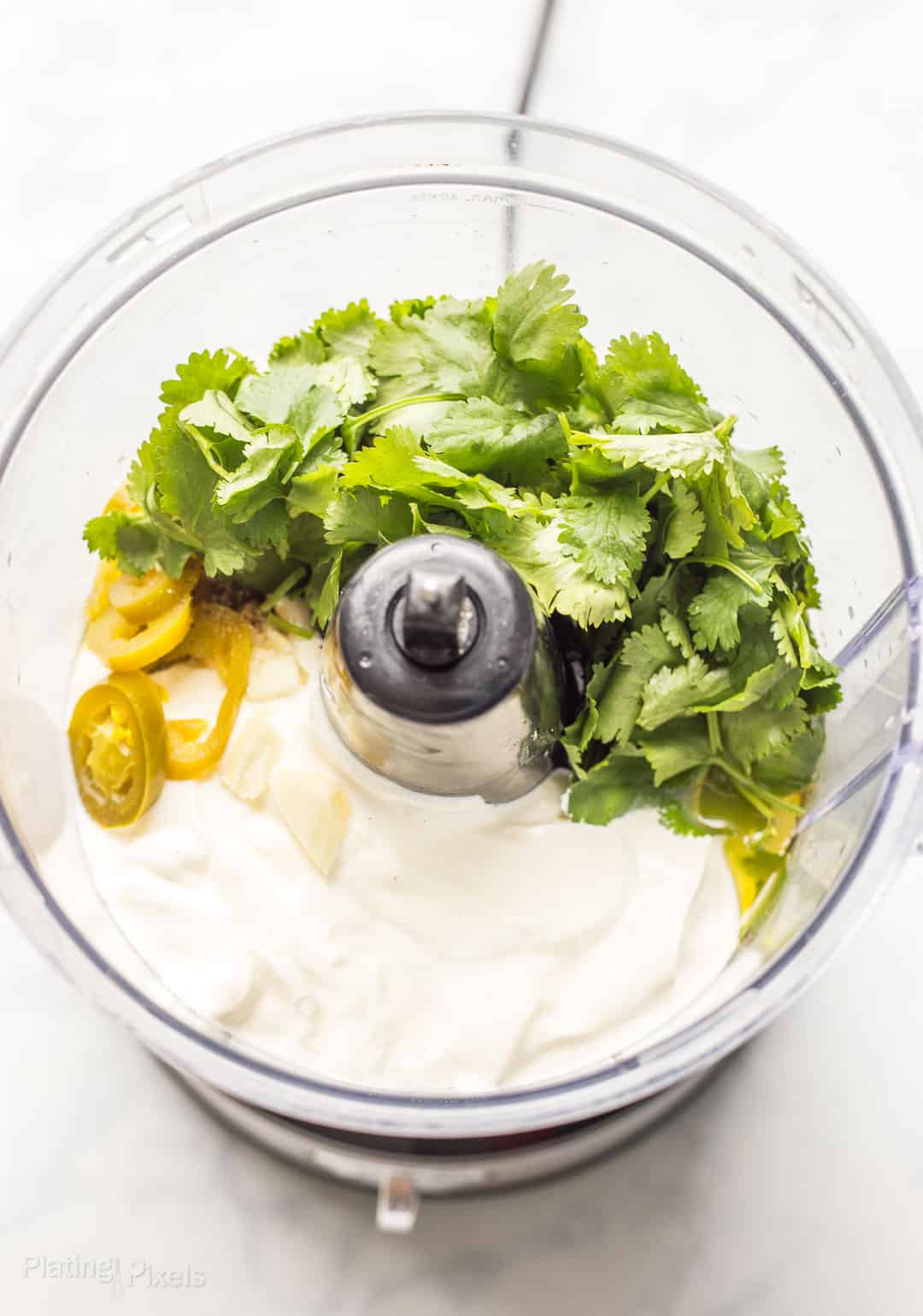 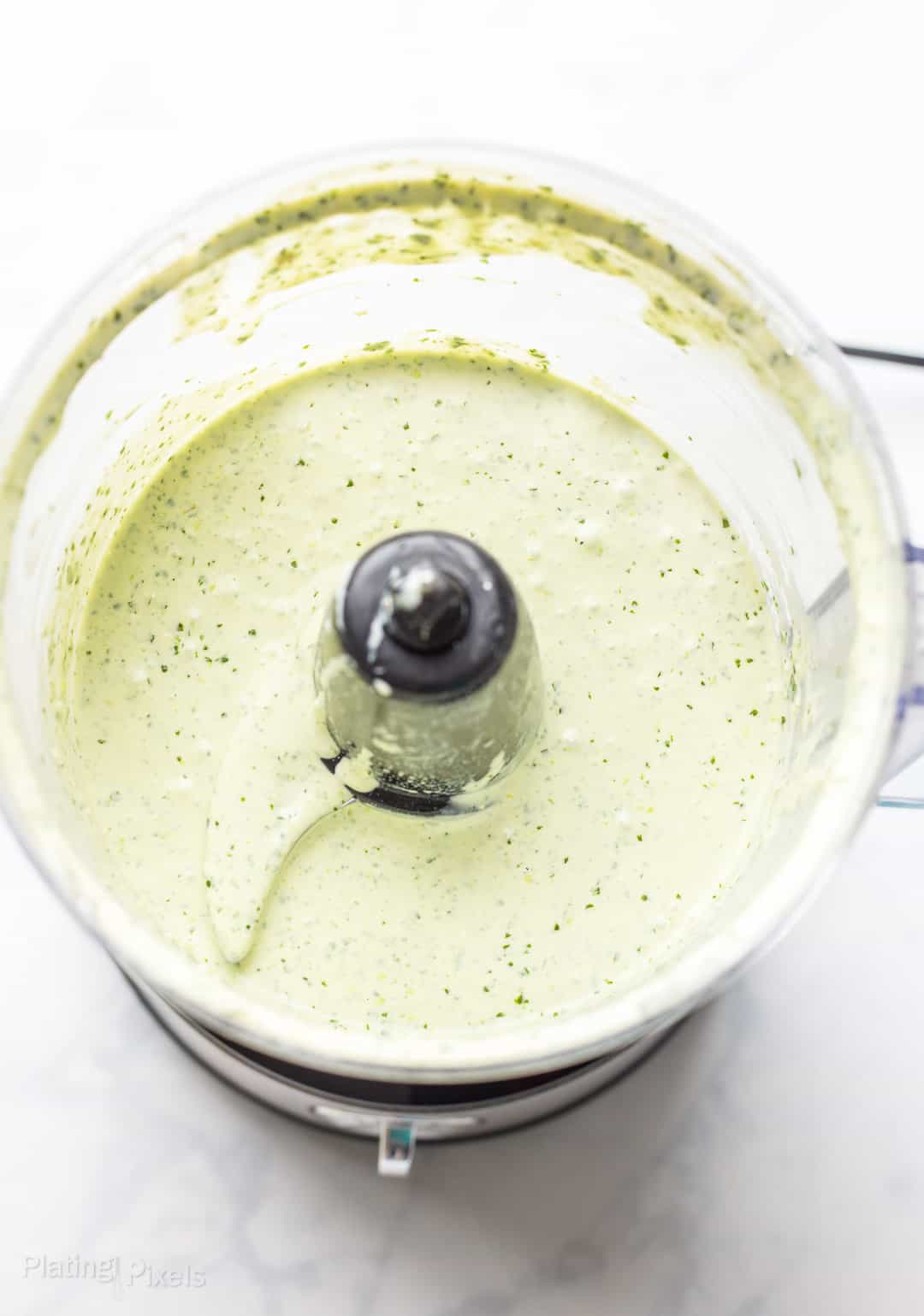 These ingredients blend into a creamy dressing that’s great in salads or as a topping. Corn oil is used to thin the yogurt or sour cream and create an ideal creamy consistency.

Mazola Corn Oil is an all-purpose, cholesterol-free cooking oil that has a variety of uses include baking, grilling, sautéing, stir-frying, or mixing up a marinade or dressing.

Mazola has a high smoke point of 450°F and performs well in a variety of cooking applications, including grilling and stir-frying. These fish tacos use baked fish, but you could also pan-sear them in a bit of corn oil.

How to Make the Dressing

Simply add all ingredients to a food processor and pulse until creamy and cilantro is broken into tiny bits.

How Long to Bake Fish 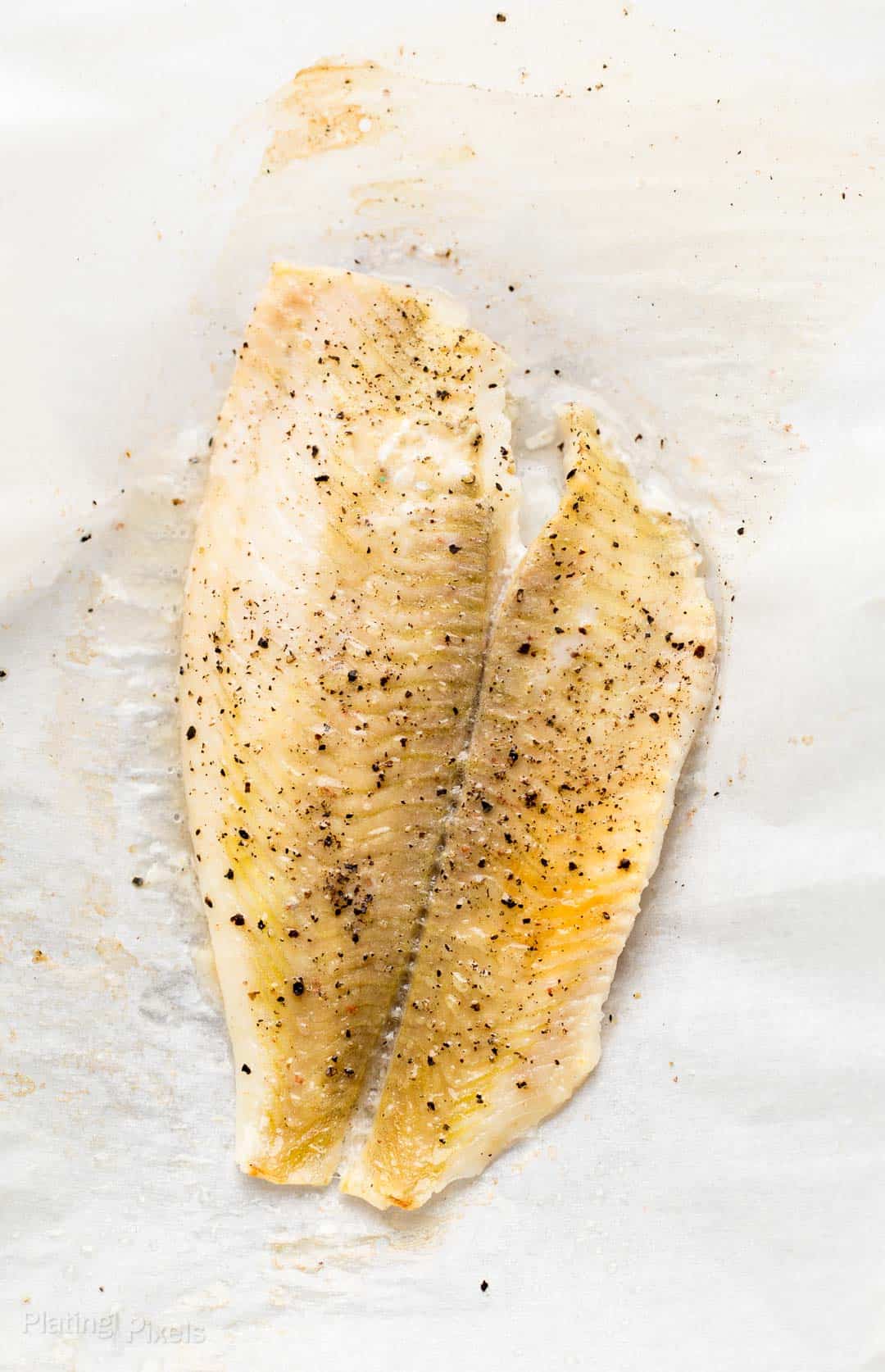 Safe fish temp: Be sure to cook fish to a safe internal temperature of 145° F when tested with a thermometer.

Note: The thickness of the fish affects baking time. This is for a roughly ⅓-inch thick fillet. Add more or less time if needed.

Heat tortillas in a pan or in the oven before assembling the tacos. A pan will brown them a bit and enhance the flavor. Baking can dry out and crisp up tortillas, so heat just until warm. 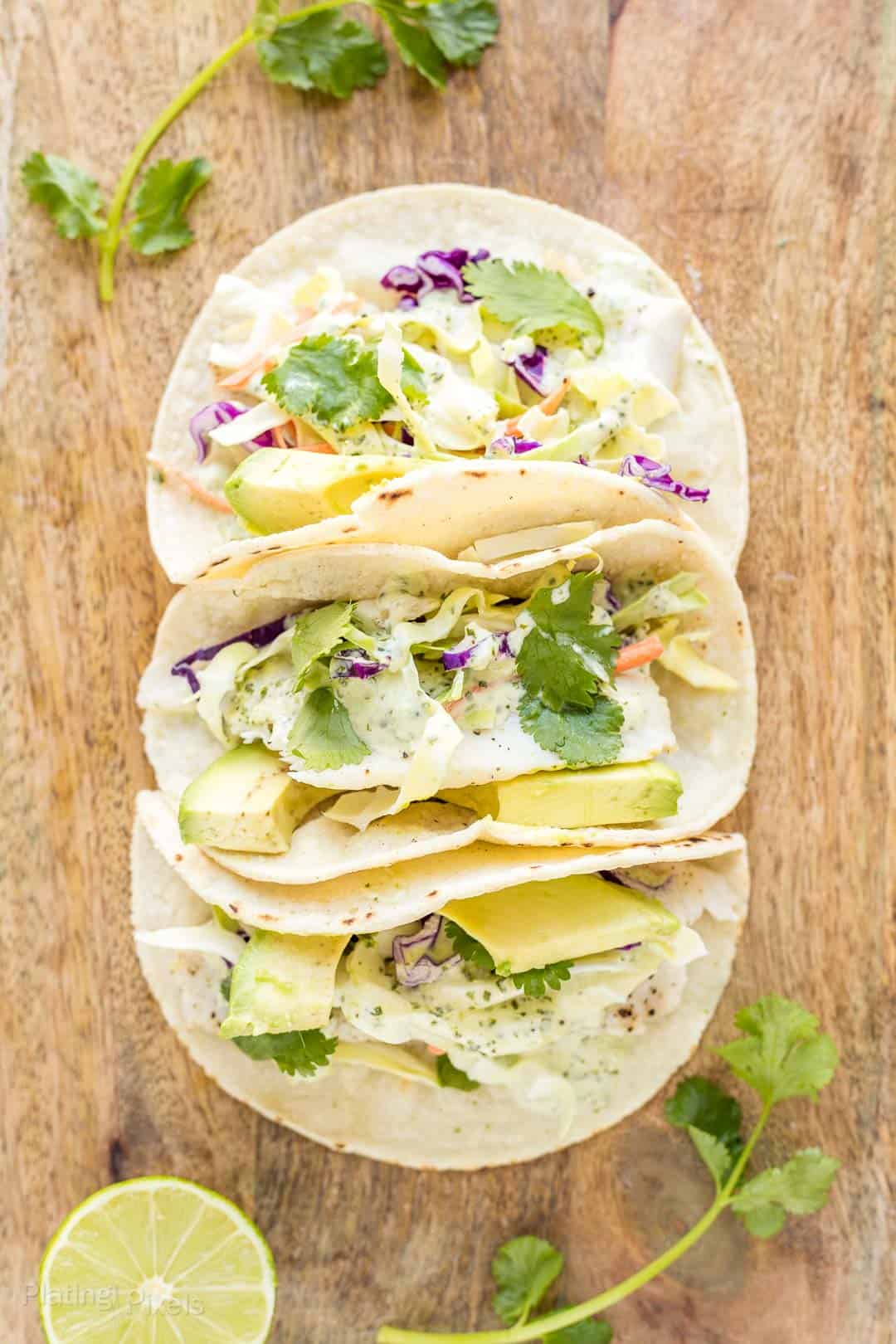 Make Just Enough for One Meal

Fish tastes best when freshly cooked and is not recommended for leftovers. Cook just enough fish for however many people you are serving. It won’t taste as good leftover and only lasts 1 to 2 days in the fridge.

You may end up with extra dressing. If you want leftovers later in the week, simply cook more fish and assemble the tacos.

Nutrition Facts
Baked Fish Tacos with Cilantro Dressing
Amount Per Serving (1 taco)
Calories 186 Calories from Fat 72
% Daily Value*
Fat 8g12%
Saturated Fat 1g6%
Cholesterol 29mg10%
Sodium 94mg4%
Potassium 379mg11%
Carbohydrates 16g5%
Fiber 4g17%
Sugar 1g1%
Protein 14g28%
Vitamin A 121IU2%
Vitamin C 9mg11%
Calcium 43mg4%
Iron 1mg6%
* Percent Daily Values are based on a 2000 calorie diet.
Like this recipe?Visit @platingpixels on Pinterest to discover more. Pin it with button below to save recipe for later.
Don't forget to leave a comment below and rate this recipe if you like it →