Pin
Share
Flip
Tweet
More
JUMP TO RECIPE - PRINT RECIPE
This easy Keto Pumpkin Pie tastes just like the traditional kind, but with a fraction of the carbs and sugar. It’s gluten-free and contains only 6 net carbs per slice, including the crust! Even if you or your guests aren’t on a keto diet, it’s a great option for a healthier Thanksgiving pie. 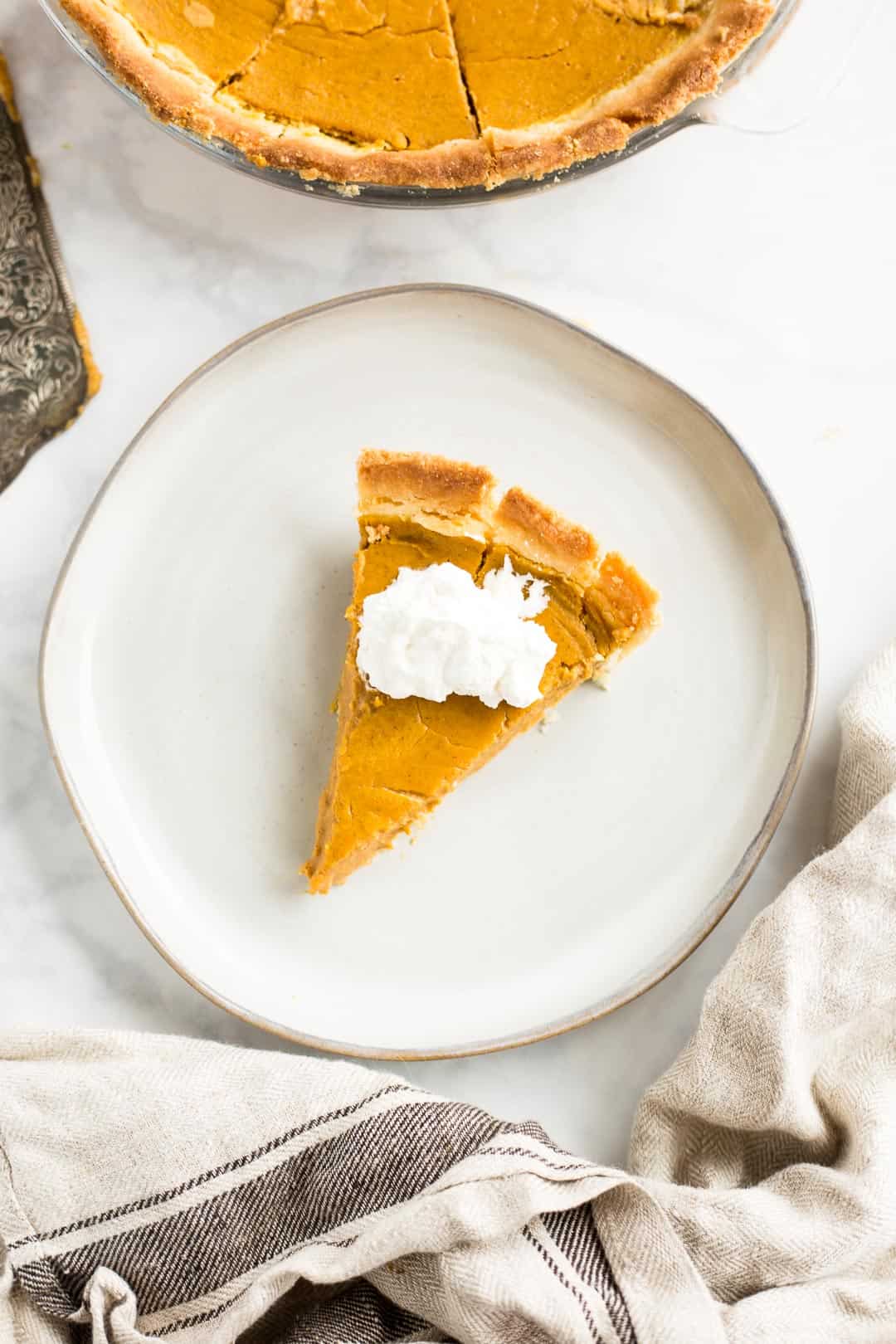 After recently sharing my Keto Pie Crust I realized I might be hooked on keto desserts. You just might be too! Especially with this Keto Pumpkin Pie. Did I mention this pie is super easy? You can prepare it in about 10 minutes, and it bakes in less than an hour. The prep work is almost non-existent. Simply wish together the ingredients for the filling and pour into a prepared pie crust.

On top of that, you can prep this low-carb pumpkin pie ahead of time. If you’re hosting for the holiday or traveling, this pie can be baked the day before. Then simply slice and serve.

This recipe has loads of tips for making a perfect Keto and Gluten-Free Pumpkin Pie. I’ve also included a recipe for homemade keto whipped cream to serve with the pie. Hopefully you’re just as excited about this pie as I am, so let’s get baking! 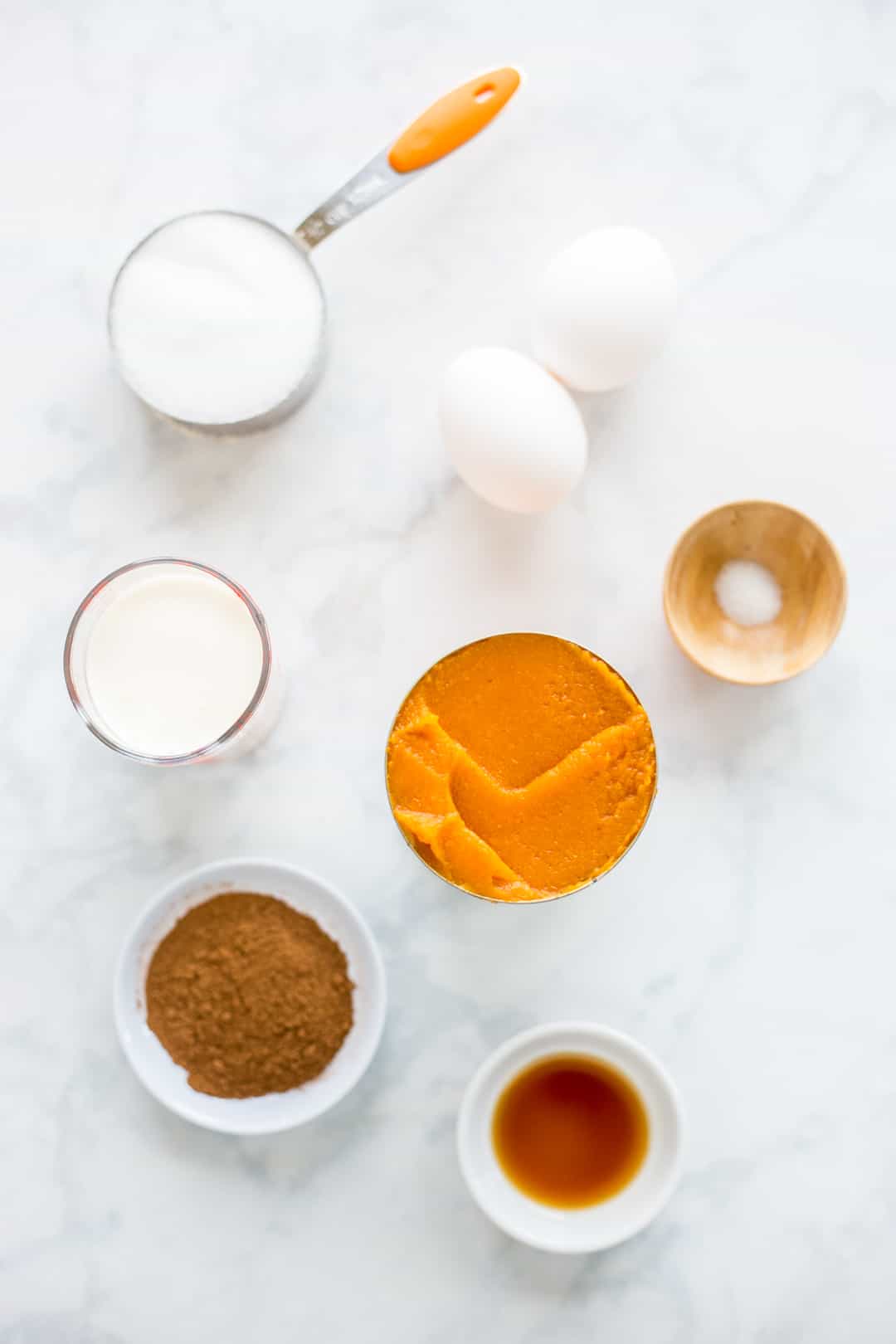 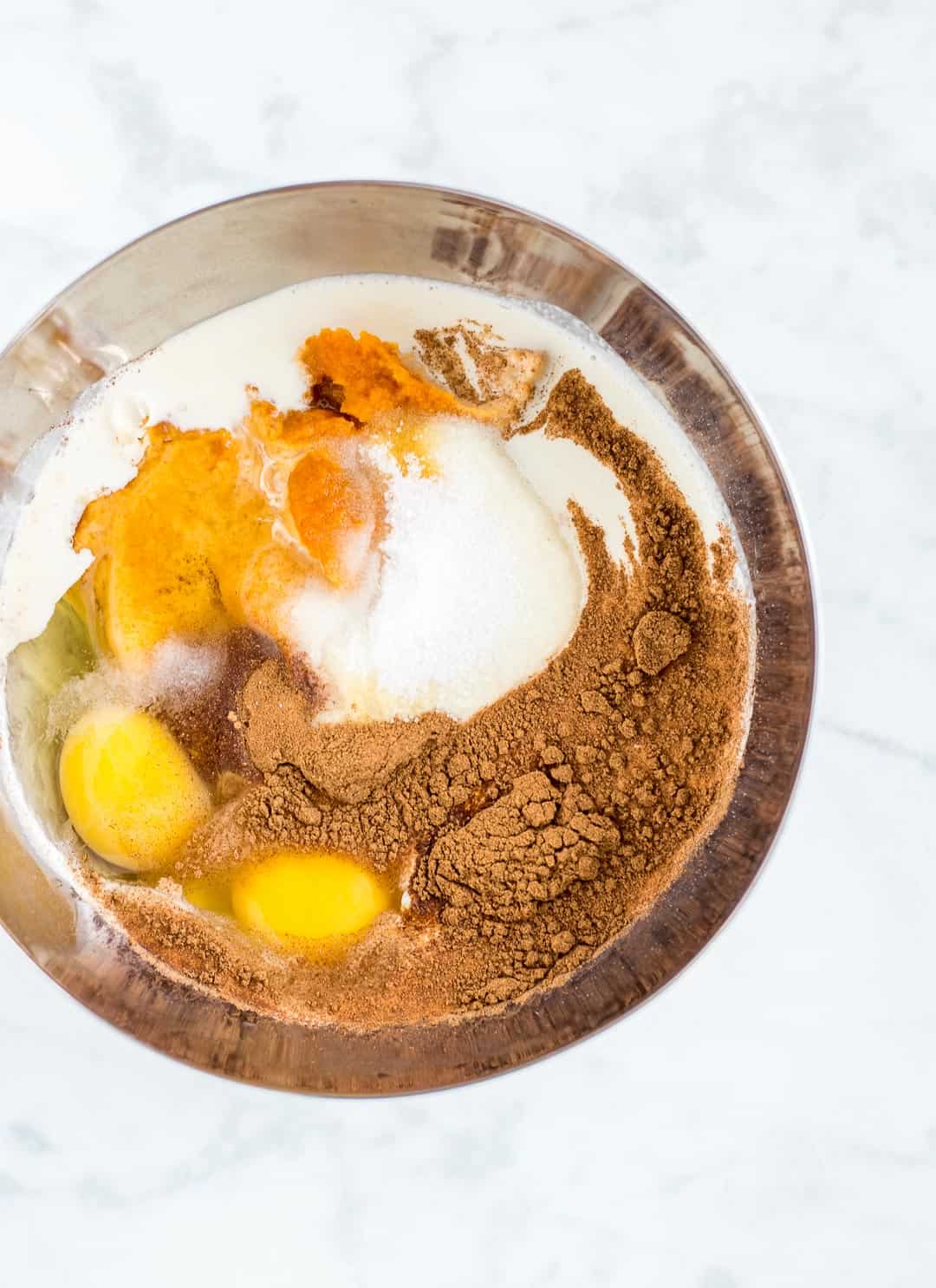 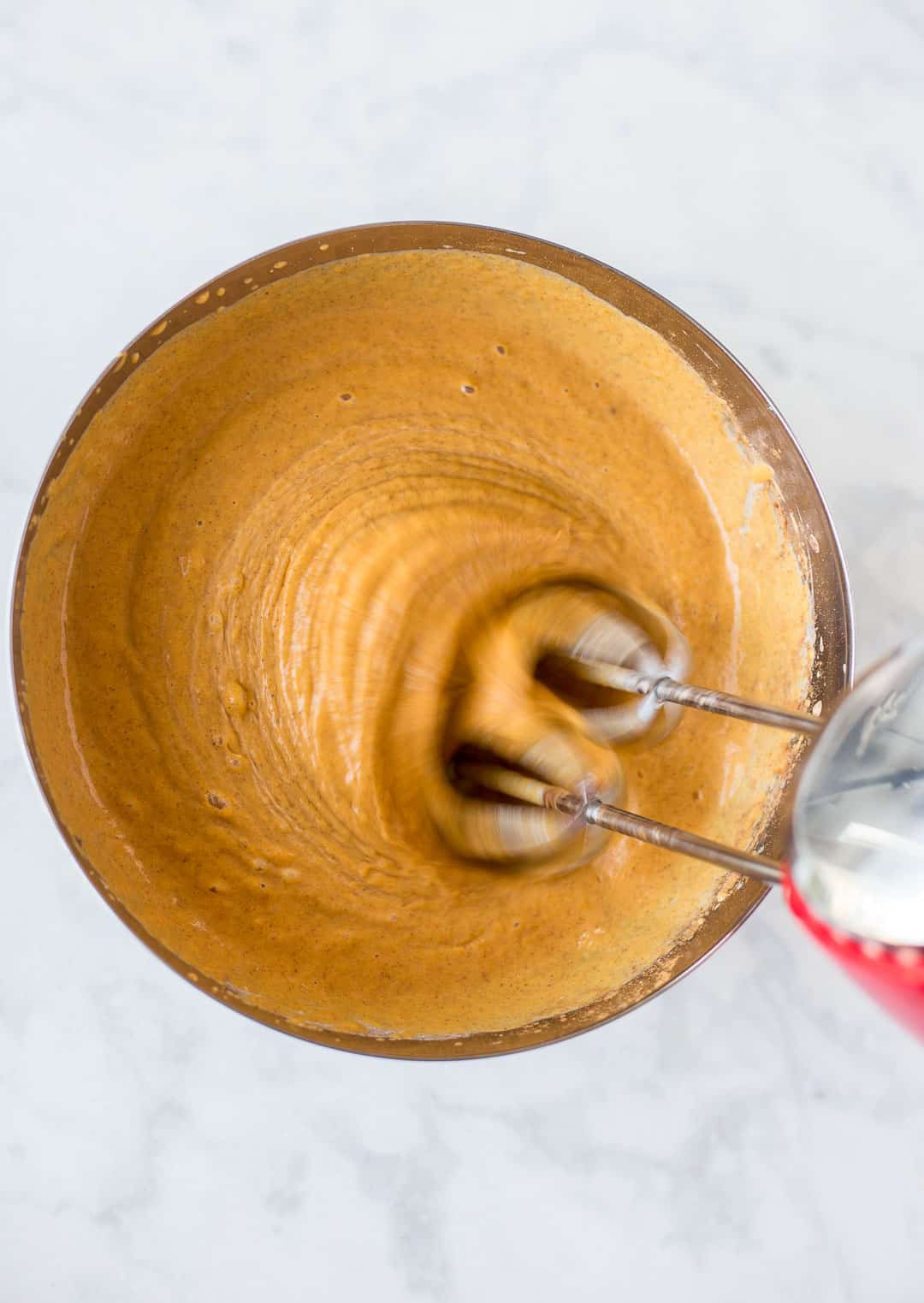 How to Make Keto Pumpkin Pie 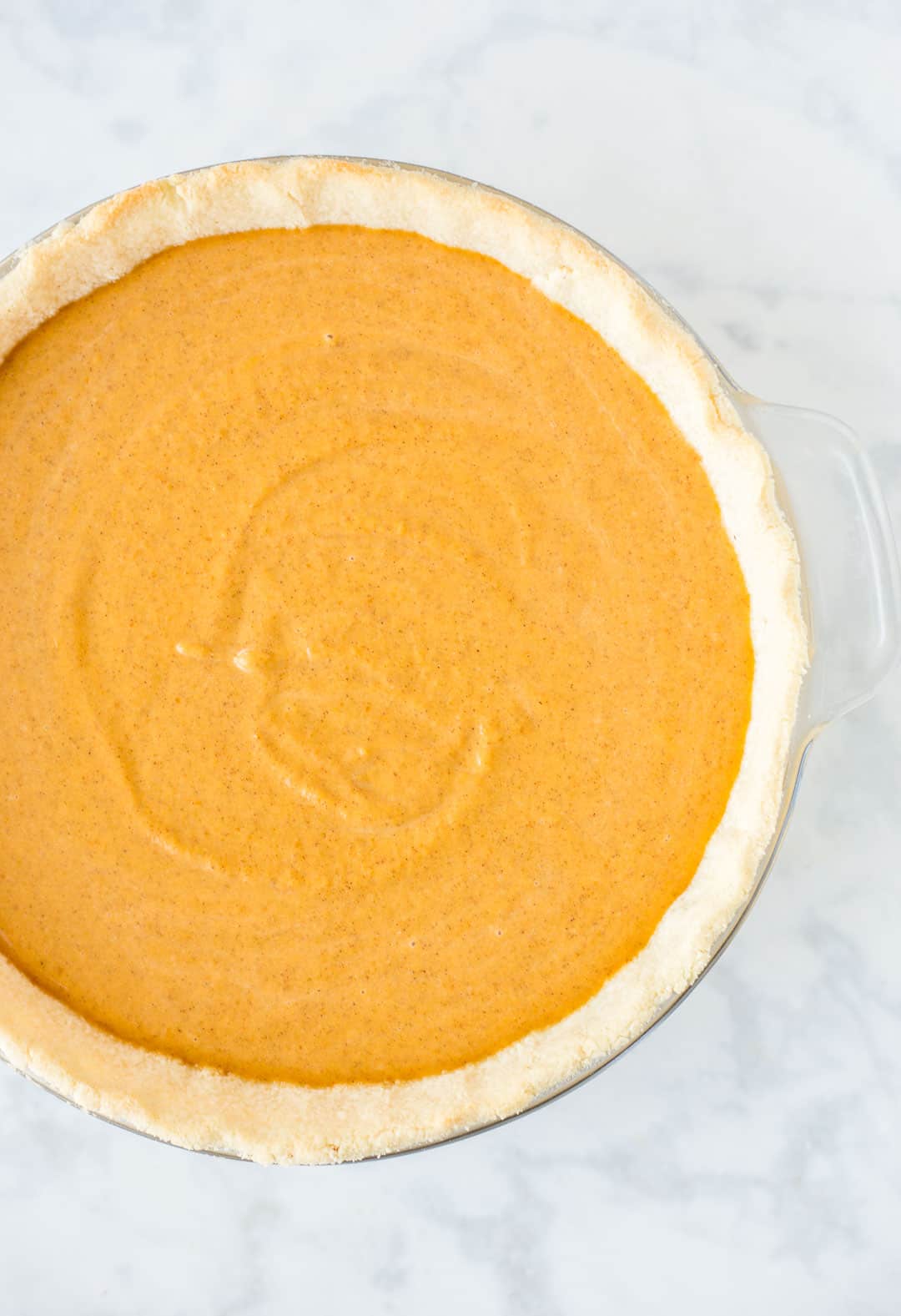 What Type of Sweetener to Use for Keto Pumpkin Pie

For this keto pumpkin pie, and keto baking in general, I prefer erythritol. It tastes similar to regular sugar and can be as a 1-1 substitute in baking. That’s right, just simply swap it for sugar. It also doesn’t have an aftertaste that some other alternative sweeteners have, so you won’t even notice the difference.

Erythritol is available in powdered, granulated, and brown sugar options, making it perfect for all types of baking. For the pie filling, granulated works best. I like using powdered for sweetening liquids and homemade whipped cream since it dissolves easier.

Note: Some people may have slight stomach discomfort due to the sugar alcohols. If so, you may want to try another option. 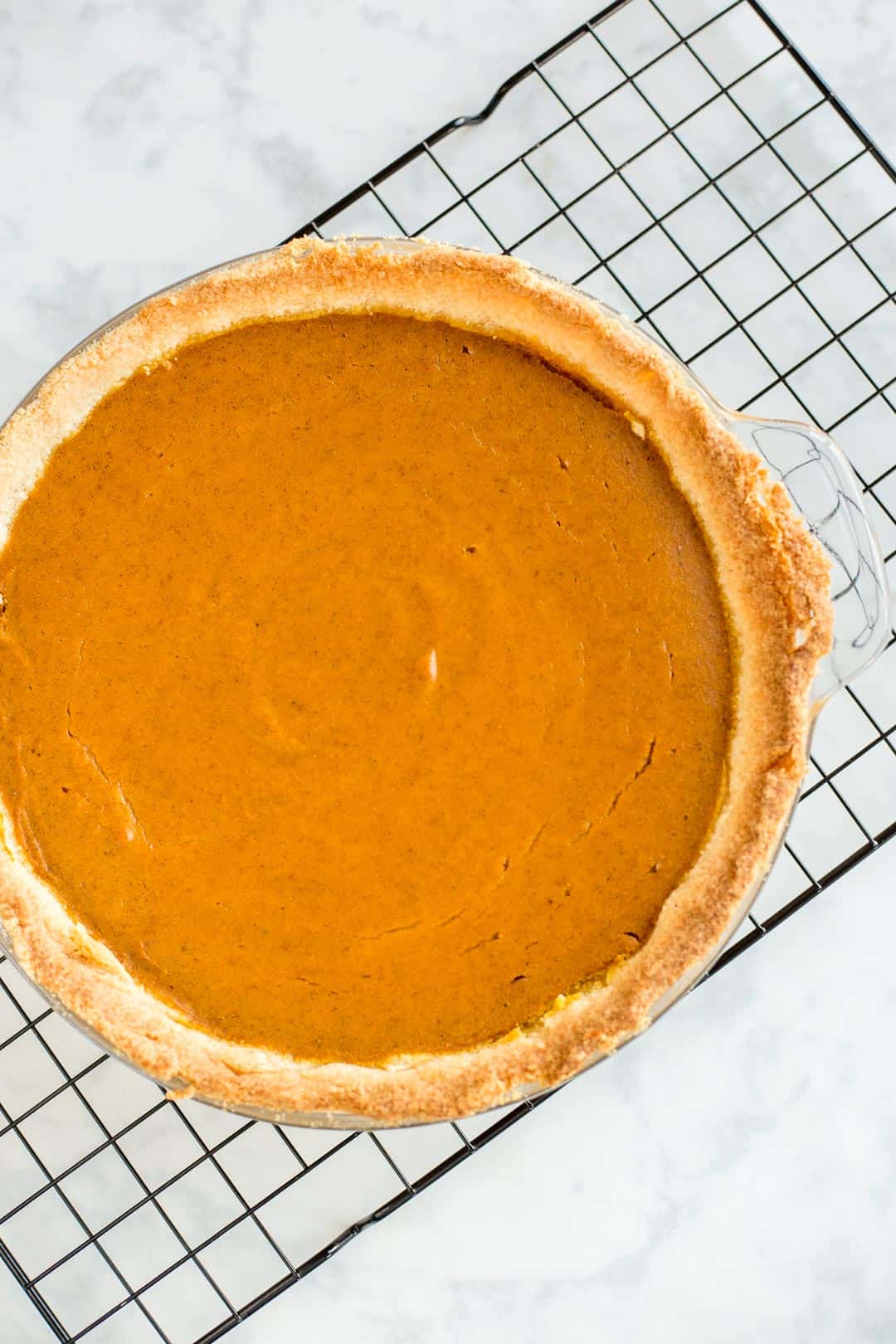 Tips for Making this Pie

Bake the Crust Ahead of Time

The raw dough won’t cook and you’ll end up with a soggy crust. Also, be sure to let the crust cool completely before adding the filling and baking the pie. This will help prevent it from burning.

What if the Pie Crust Starts to Burn?

Since you need to bake the crust ahead of time, it may brown before the pie filling is cooked. Check the pie after about 25 minutes. If the crust is browned cover it with foil. Be careful to cover just the edges and try not to hit the filling as it will leave a mark.

How to Tell if the Pie is Set

To tell if the pie filling is set (or cooked) you can test it a couple of ways: 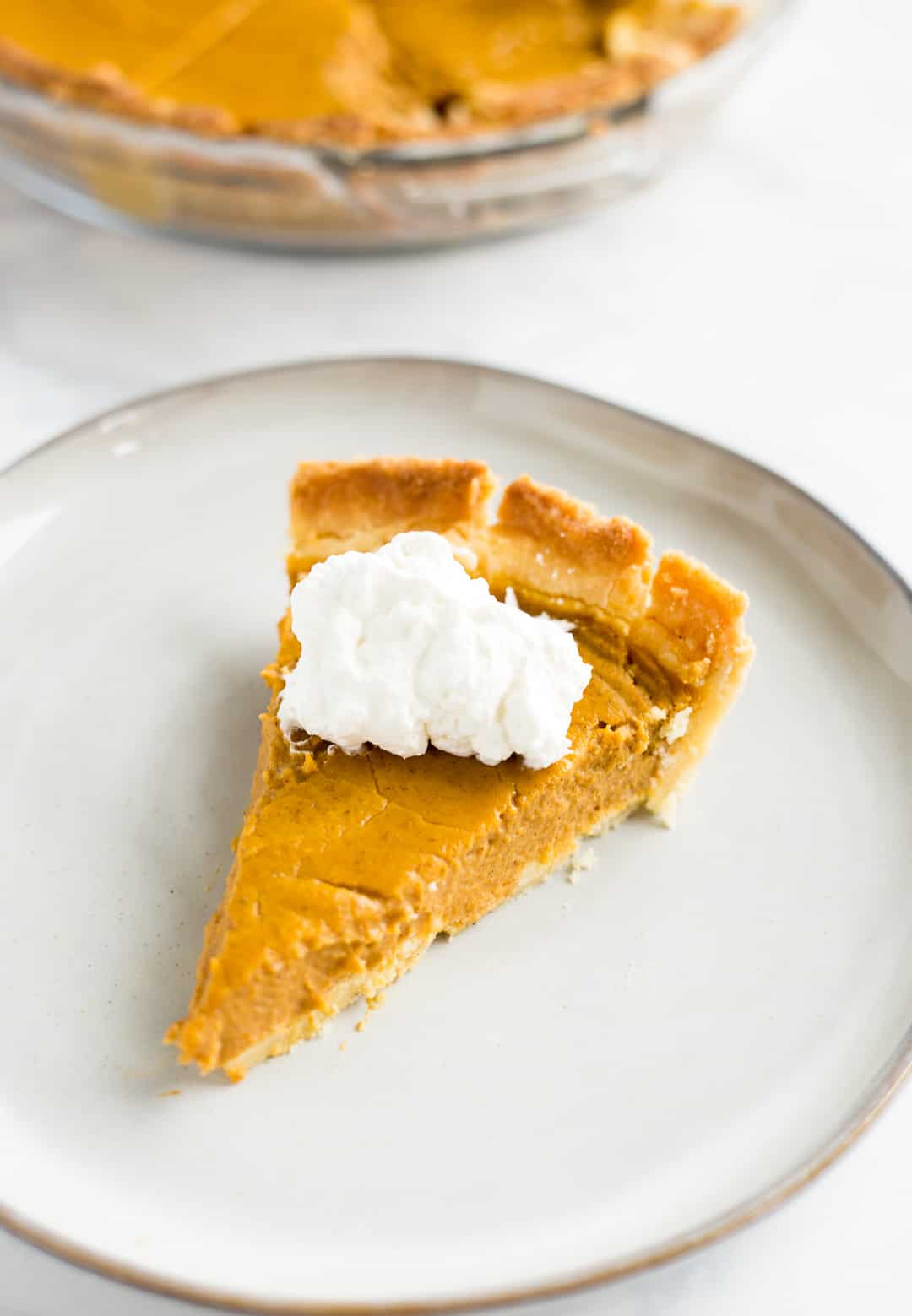 What if the Pie Filling Isn’t Set?

For a thicker pie, you can use 1 egg yolk and two full eggs, instead of 3 eggs. It will be slightly less creamy, but easier to cut and serve

The pie will be very hot out of the oven. Bring to room temp on a wire rack, then cover and place in the fridge for at least 2 hours to let it set before cutting.

Can You Bake the Pie Ahead of Time?

Absolutely and I highly recommend this! You can make the pie as directed and chill it in the fridge overnight for an easy Thanksgiving dessert. For the best flavor and texture, I recommend not more than 24 hours. This will save you time if you’re hosting or traveling. 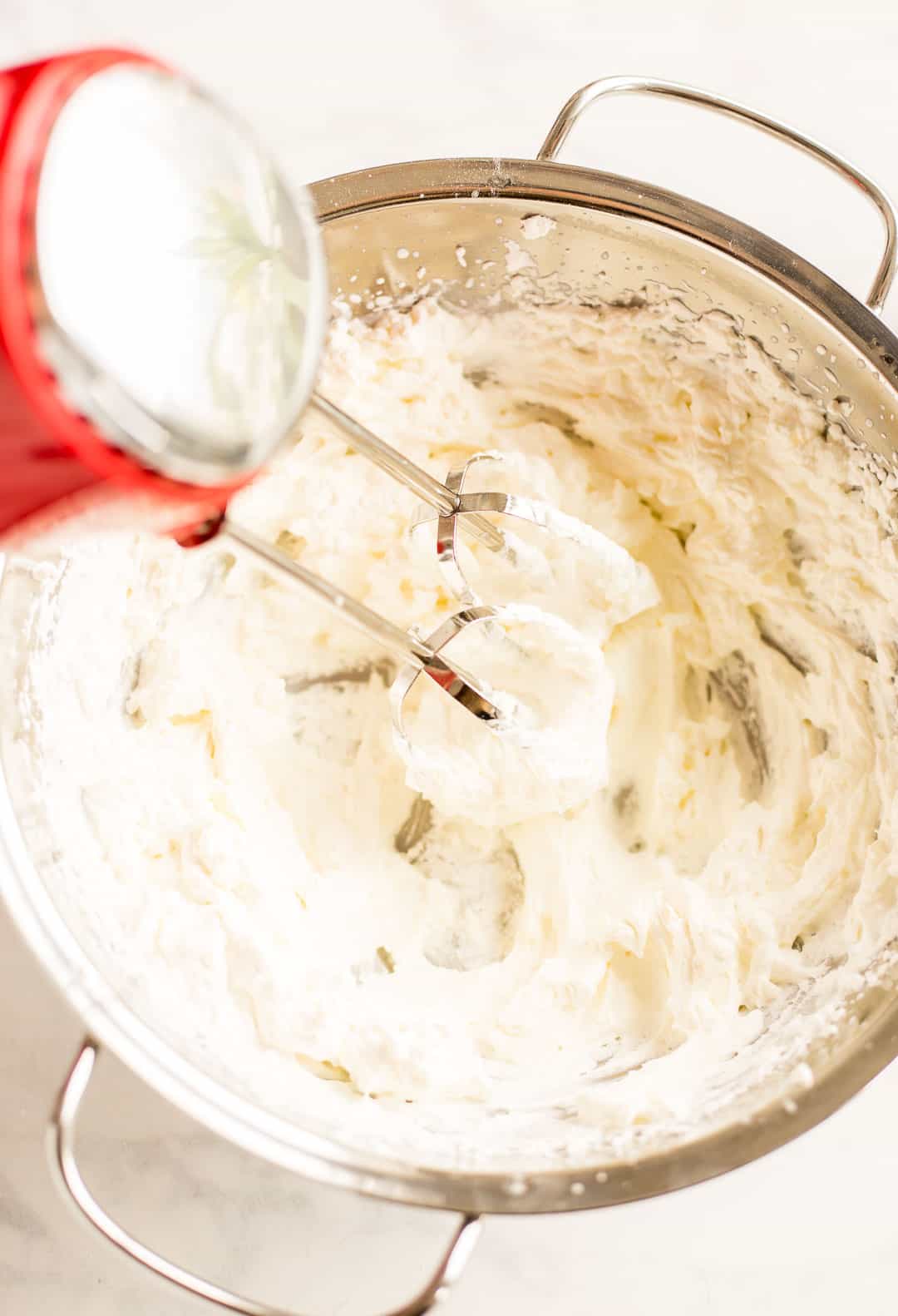 What About Whipped Cream, Is it Keto?

Store-bought whipped creams typically contain sugar and are not keto. I like to make my own homemade keto whipped cream. Here’s how:

Place ½ cup of chilled heavy whipping cream in a large bowl. With a stand or hand mixer, beat on high until stiff peaks form, about 3 minutes. Mix or stir in about 1-tablespoon of powdered erythritol to sweeten to desired taste.

Carbs in a Slice of Keto Pumpkin Pie 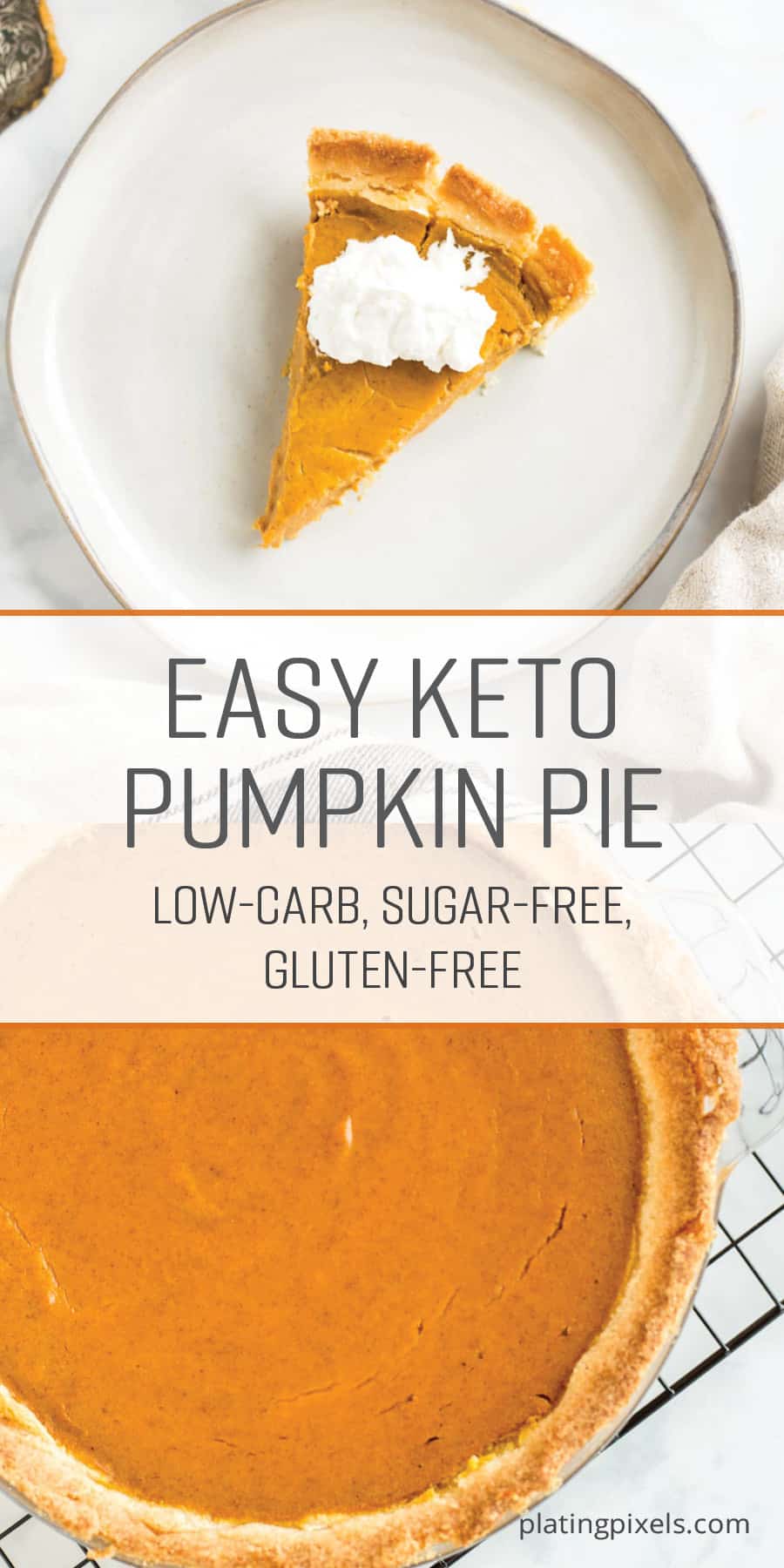 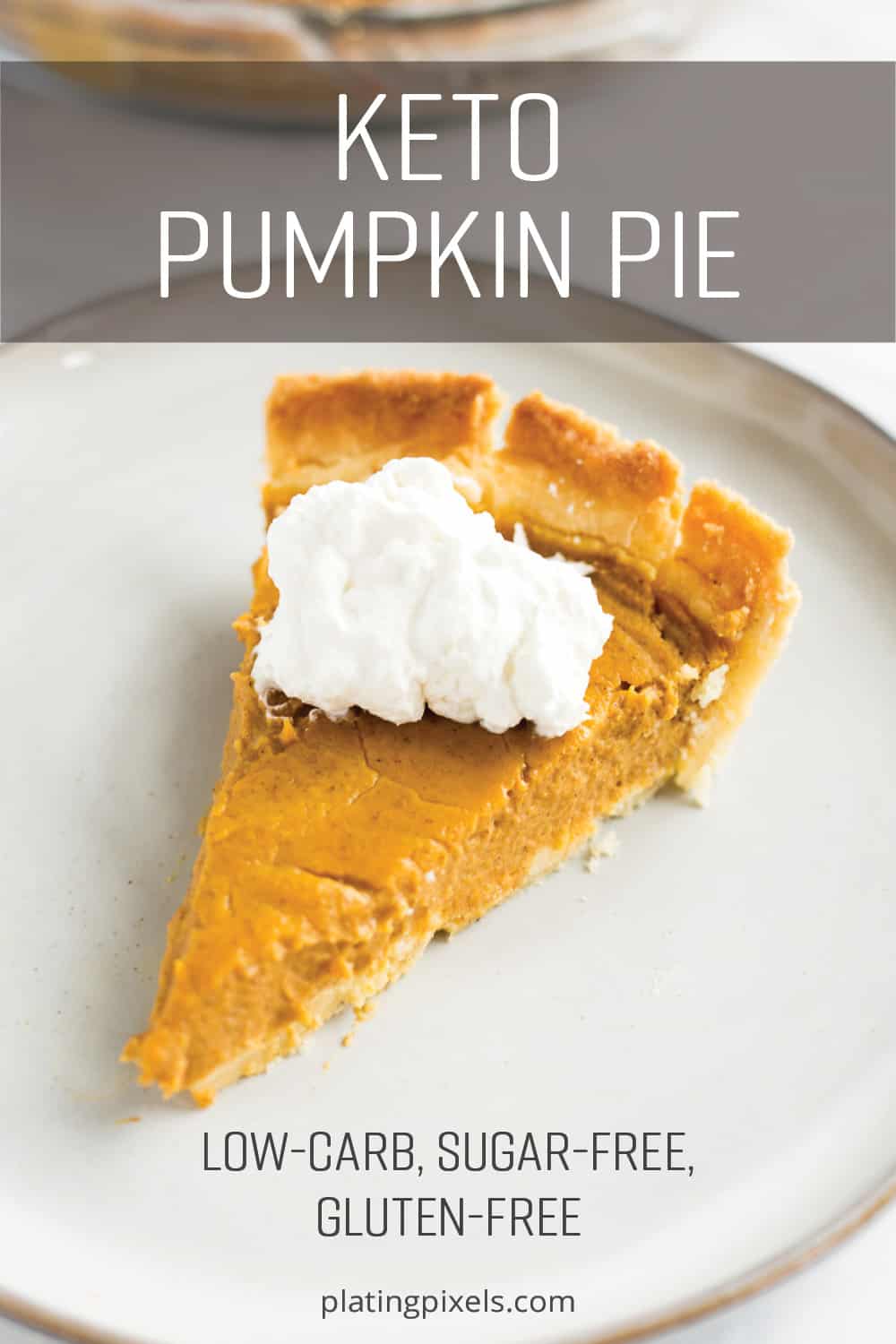