Cheesecake or brownie? Why are some decisions in life so tough! As a food blogger I can safely say you can have your cake and eat it too; or in this case, your cheesecake and brownie all at the same time. Life is all about finding the right balance; usually you have to decide on one thing, while sacrificing something else. Well, not with this wonderful 2 in 1 recipe! 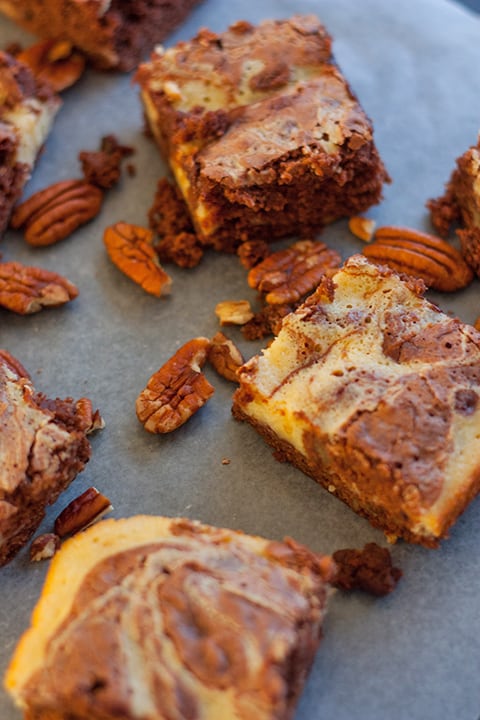 These Swirled Vanilla Cheesecake and Chocolate Brownie Bars are oh so satisfying and save you the hassle of deciding. It’s a little more work since you are in essence making two recipes, but don’t let that stop you. Trust me when I say it will all be worth it. Start off by making a rich homemade chocolate brownie batter. I suggest skipping the store-bought box and giving yourself that sense of accomplishment, plus you have more control of what ingredients (ideally natural) that you are putting into your dessert. Then make the vanilla cheesecake batter. 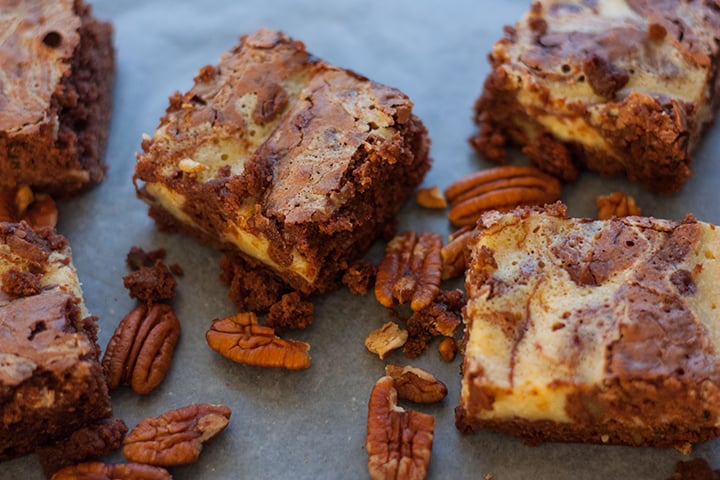 As if this recipe wasn’t flavorful enough, mixed in toasted pecans add crunch to the chewy brownie bars. It’s just the right mixture of flavor and texture. This is all easier than it sounds, follow the recipe below and you’ll soon be enjoying these Swirled Vanilla Cheesecake and Chocolate Brownie Bars. Check out my fancy animated photograph that shows the steps as well.

The texture, patterns and colors are the star of this recipe, creating a visually appealing image. It helps to cut them into bars, creating even more shapes; instead of photographing the entire pan. Place over parchment paper to create a neutral background and draw the viewer’s eye towards the brownie bars. Pecans added to the scene compliments the colors and create a more energetic image. It also shows this ingredient that would otherwise be unrecognizable.

Nutrition Facts
Swirled Vanilla Cheesecake and Chocolate Brownie Bars
Amount Per Serving
Calories 194 Calories from Fat 81
% Daily Value*
Fat 9g14%
Saturated Fat 4g25%
Cholesterol 37mg12%
Sodium 58mg3%
Potassium 120mg3%
Carbohydrates 24g8%
Fiber 1g4%
Sugar 16g18%
Protein 2g4%
Vitamin A 105IU2%
Vitamin C 0.3mg0%
Calcium 25mg3%
Iron 1.3mg7%
* Percent Daily Values are based on a 2000 calorie diet.
Like this recipe?Visit @platingpixels on Pinterest to discover more. Pin it with button below to save recipe for later.
Don't forget to leave a comment below and rate this recipe if you like it →