This Pressure Cooker Chile Verde Pork is an easy weeknight meal with authentic Mexican flavors. The pork is fork-tender in just 25 minutes with pressure cooking, served in a from-scratch Chile Verde sauce. You’ll also learn a shortcut to a quicker version of the sauce.

This shop has been compensated by Collective Bias, Inc. and its advertiser. All opinions are mine alone. 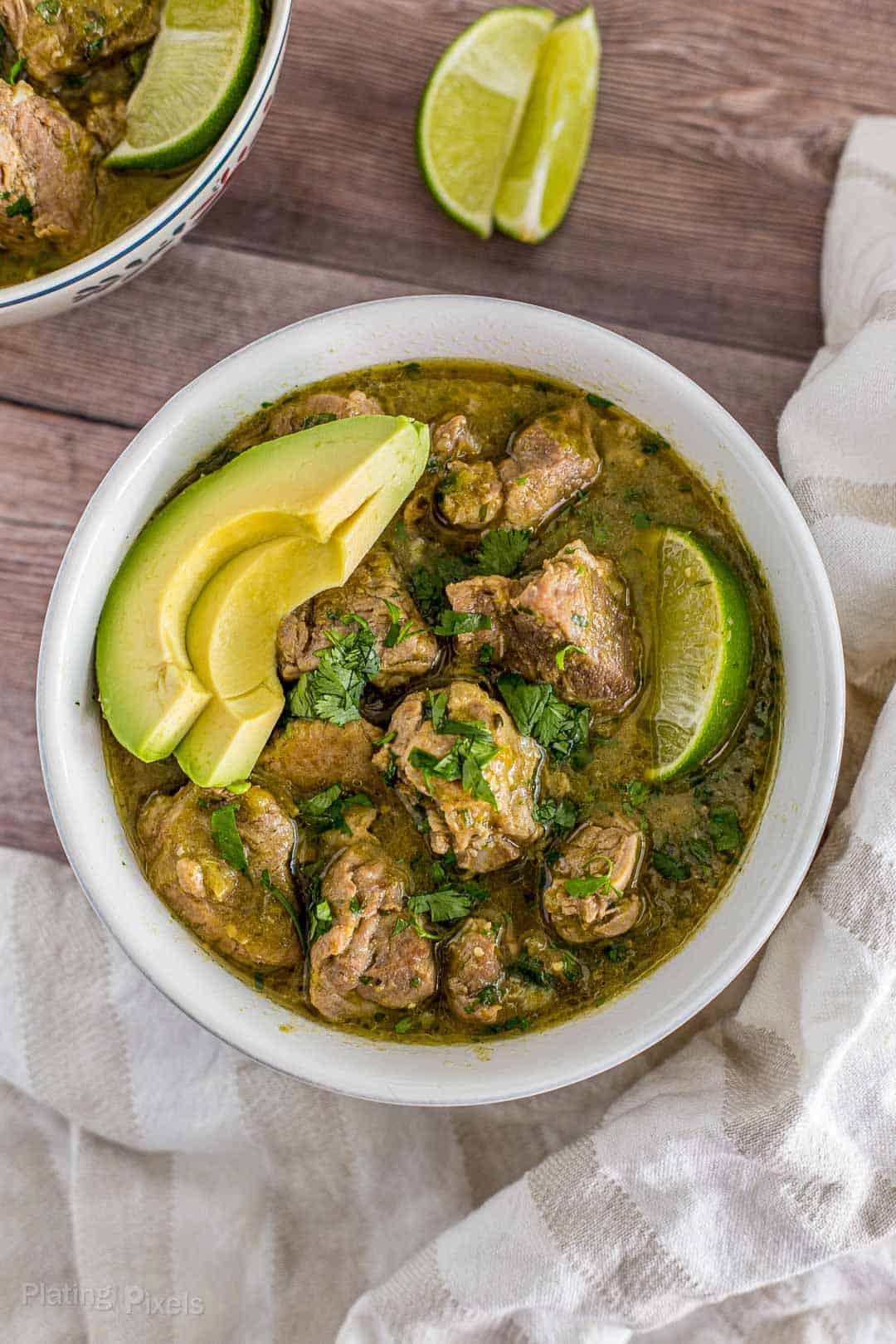 Traditionally I’ve always slow-cooked pork shoulder, which comes out great, but takes about 8 hours. Pressure cooking does this in a fraction of the time, while still creating fork-tender Pork Chile Verde.

This recipe uses traditional ingredients which I’ll go over, as well as a shortcut method to make Chile Verde even easier. 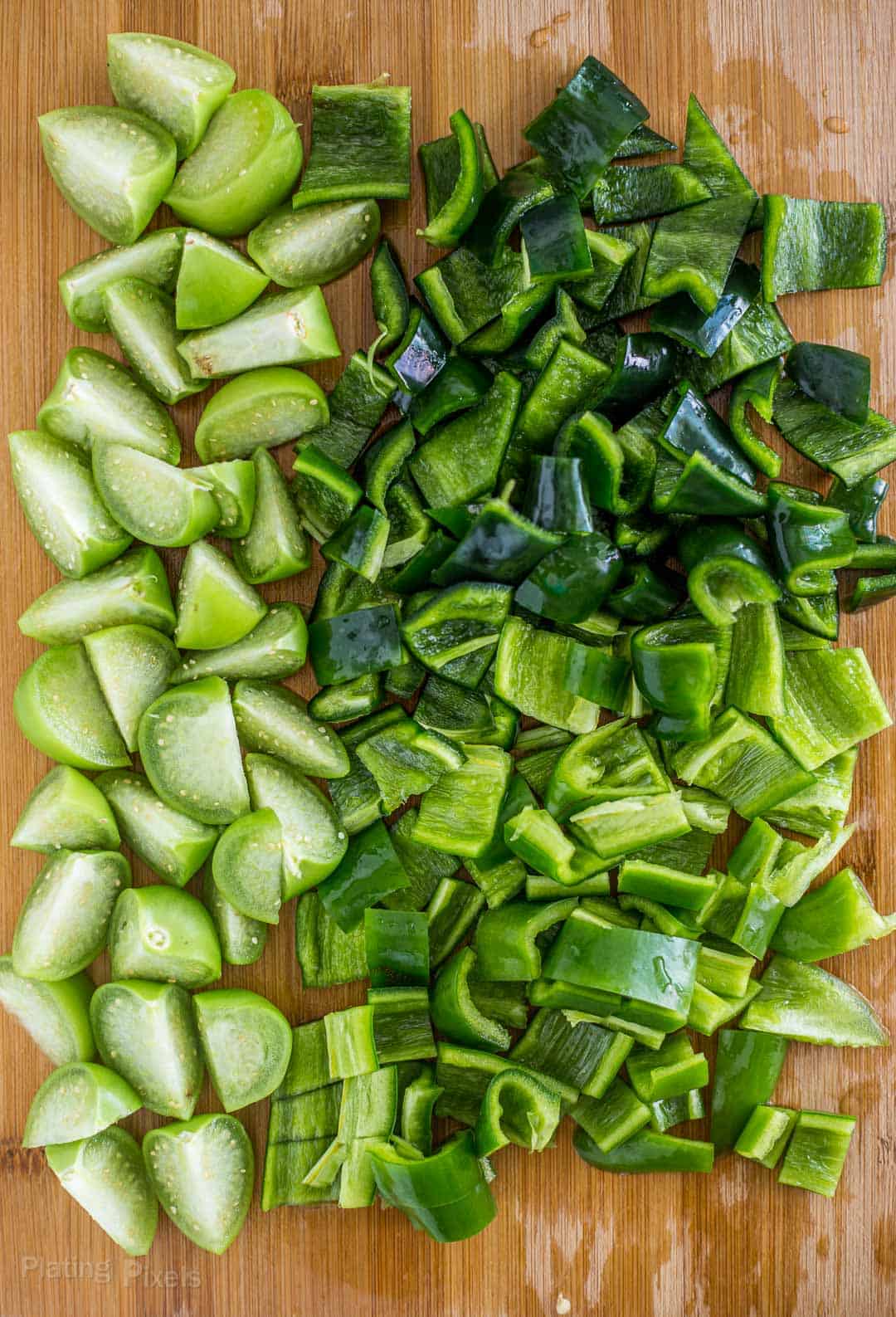 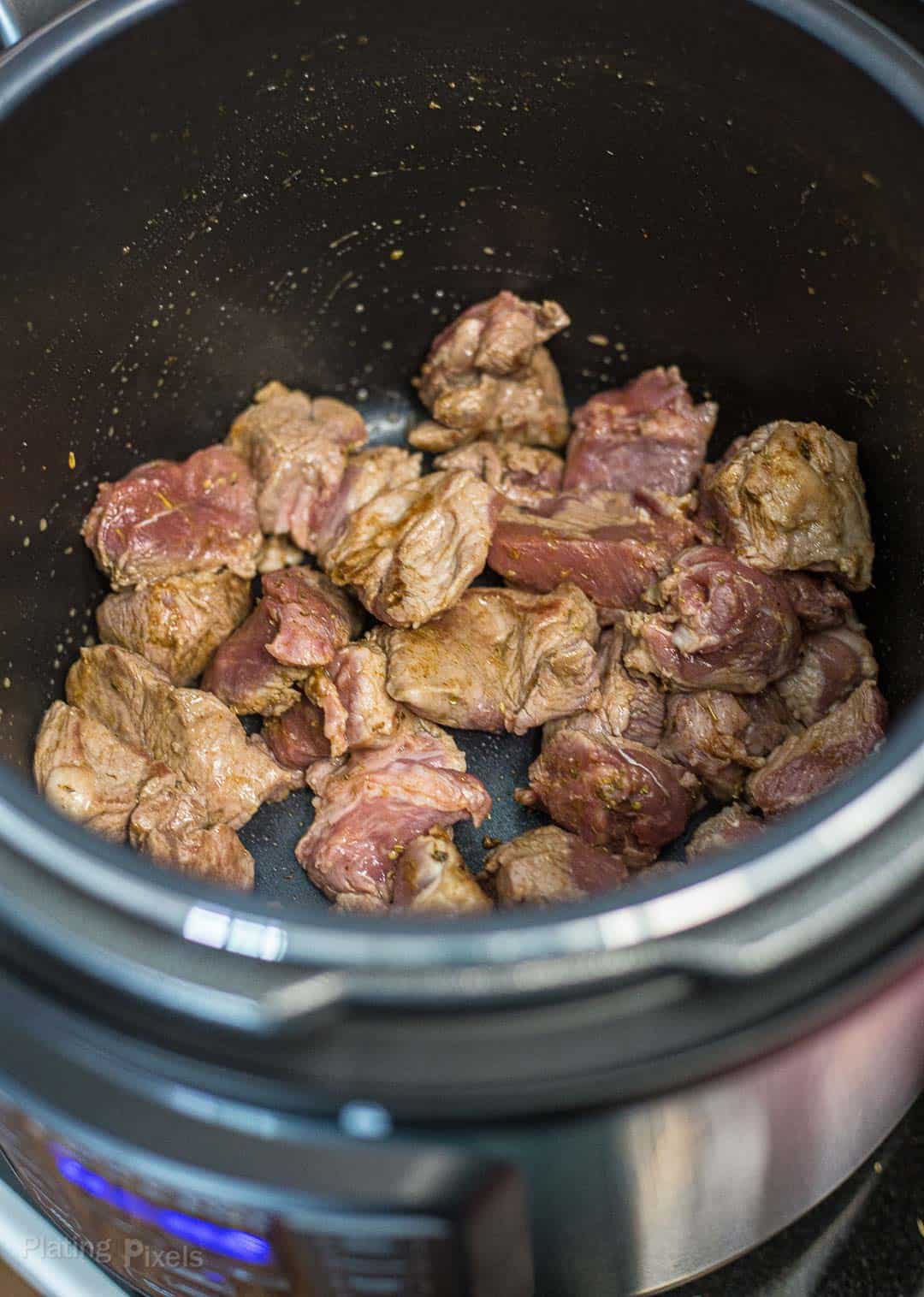 How to Make Chile Verde in a Pressure Cooker 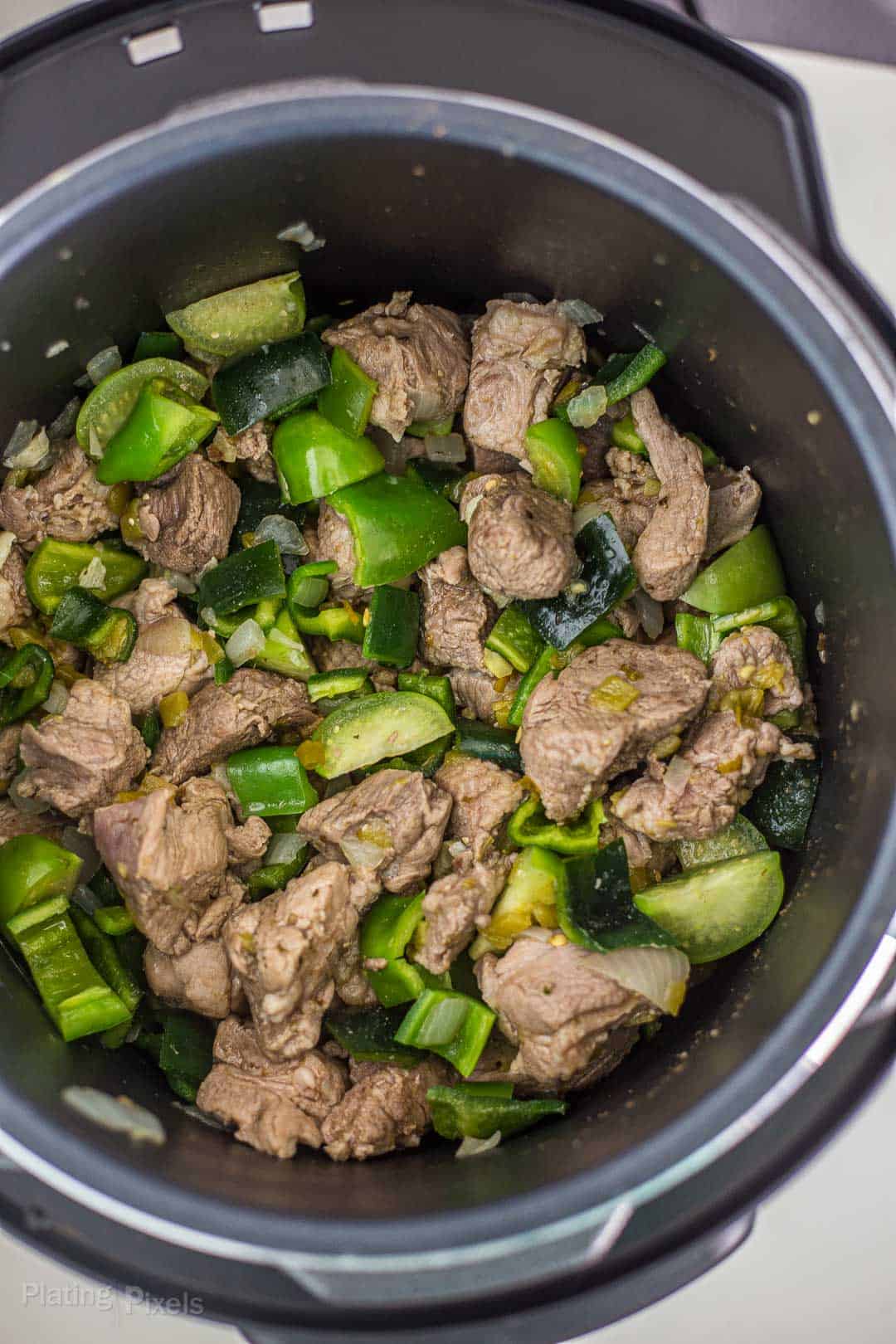 Pressure cook on HIGH for 25 minutes: 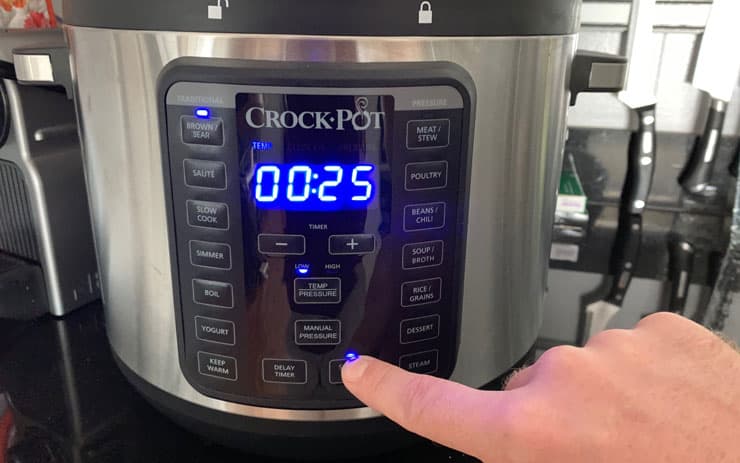 An easy alternative to homemade chile verde sauce is to use jarred chile verde from the store. The flavor won’t be nearly as good as the homemade version, but it works in a pinch.

To make: Prepare pork shoulder as instructed, but omit the rest of the sauce ingredients. Substitute with 24-ounces of jarred chile verde sauce and pressure cook as directed. 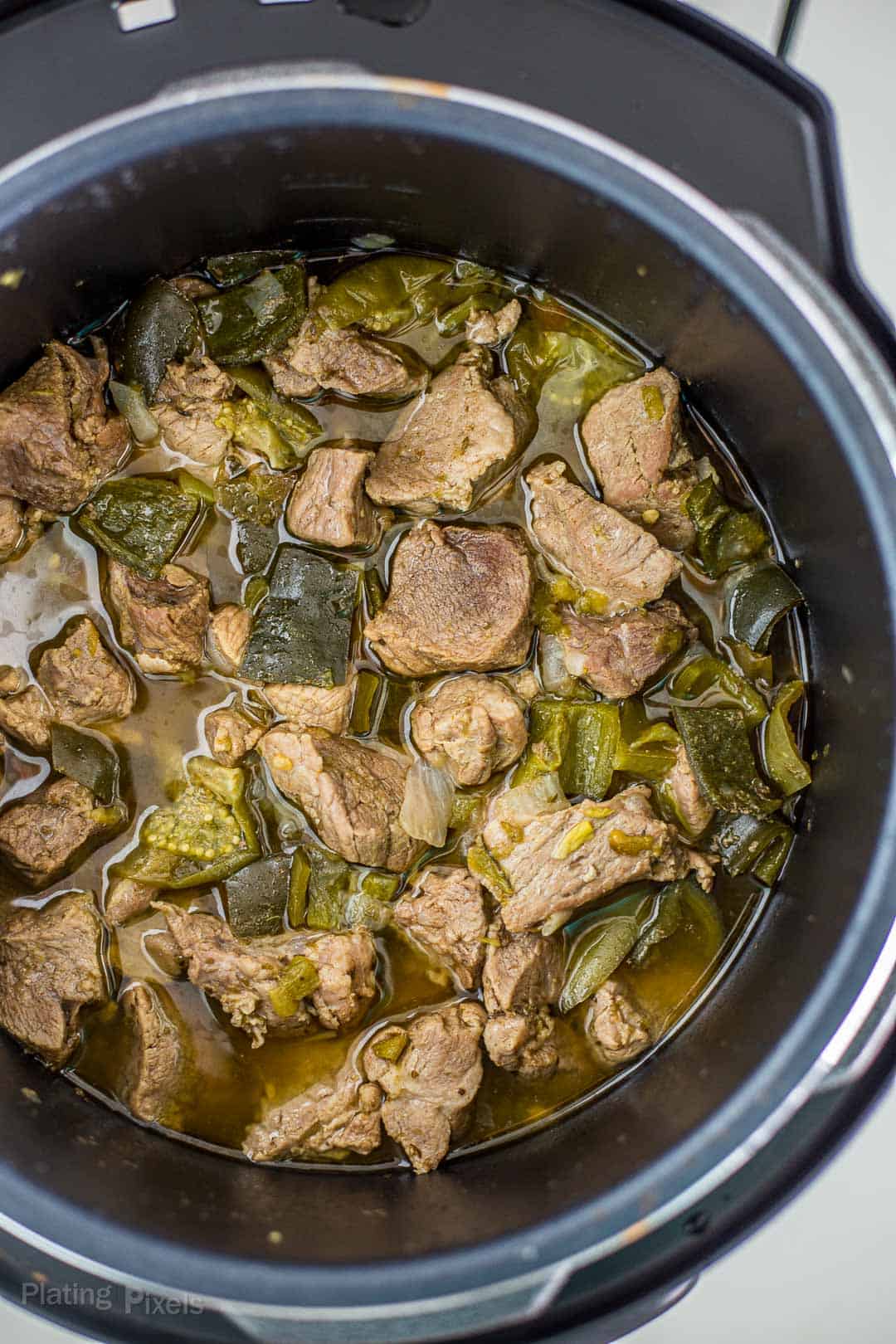 What Pressure Cooker to Use?

I used the Crock-Pot® Express 8-Quart Pressure Cooker to make this recipe. Crock-Pot® is a leader in one-pot cooking, and the Express Crock is no exception. It pressure cooks, slow cooks, browns/sears, sautés, and steams all using one versatile appliance. You could also use another multi-cooker such as an Instant Pot. 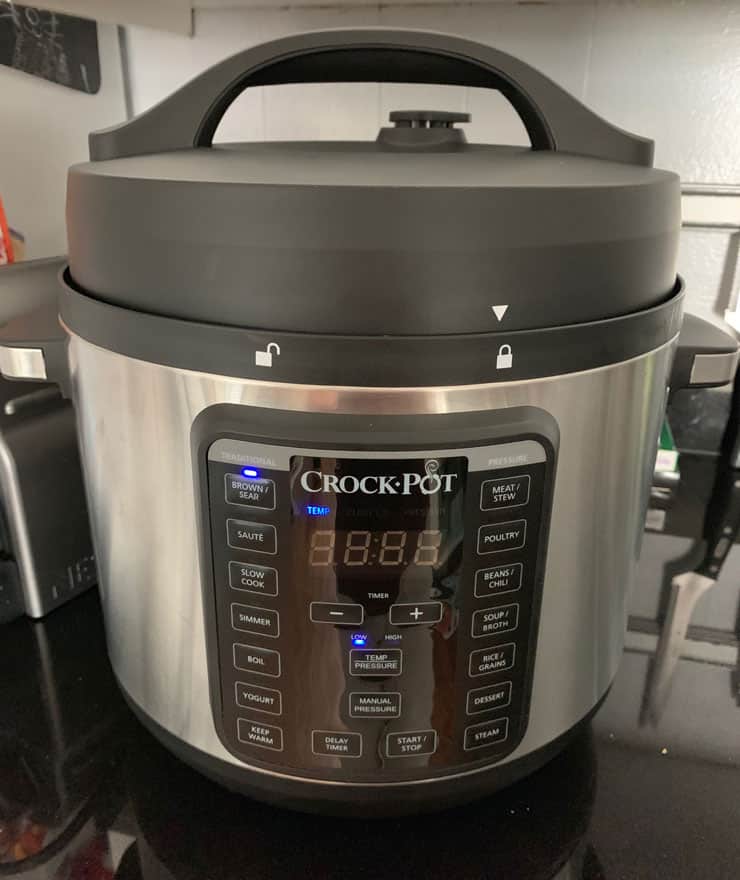 This is especially useful for this recipe. Pork and vegetables can be seared before pressure cooking to bring out more flavor. If you only had a traditional pressure-cooker, you would have to do this separately in a pan over the stove.

Pressure cooking is an average 70% faster than traditional cooking, and Crock-Pot® products makes weeknight meals easy for those with busy lives. The Crock-Pot® Express Crock is a great one pot solution, saving time while you make food for yourself and others 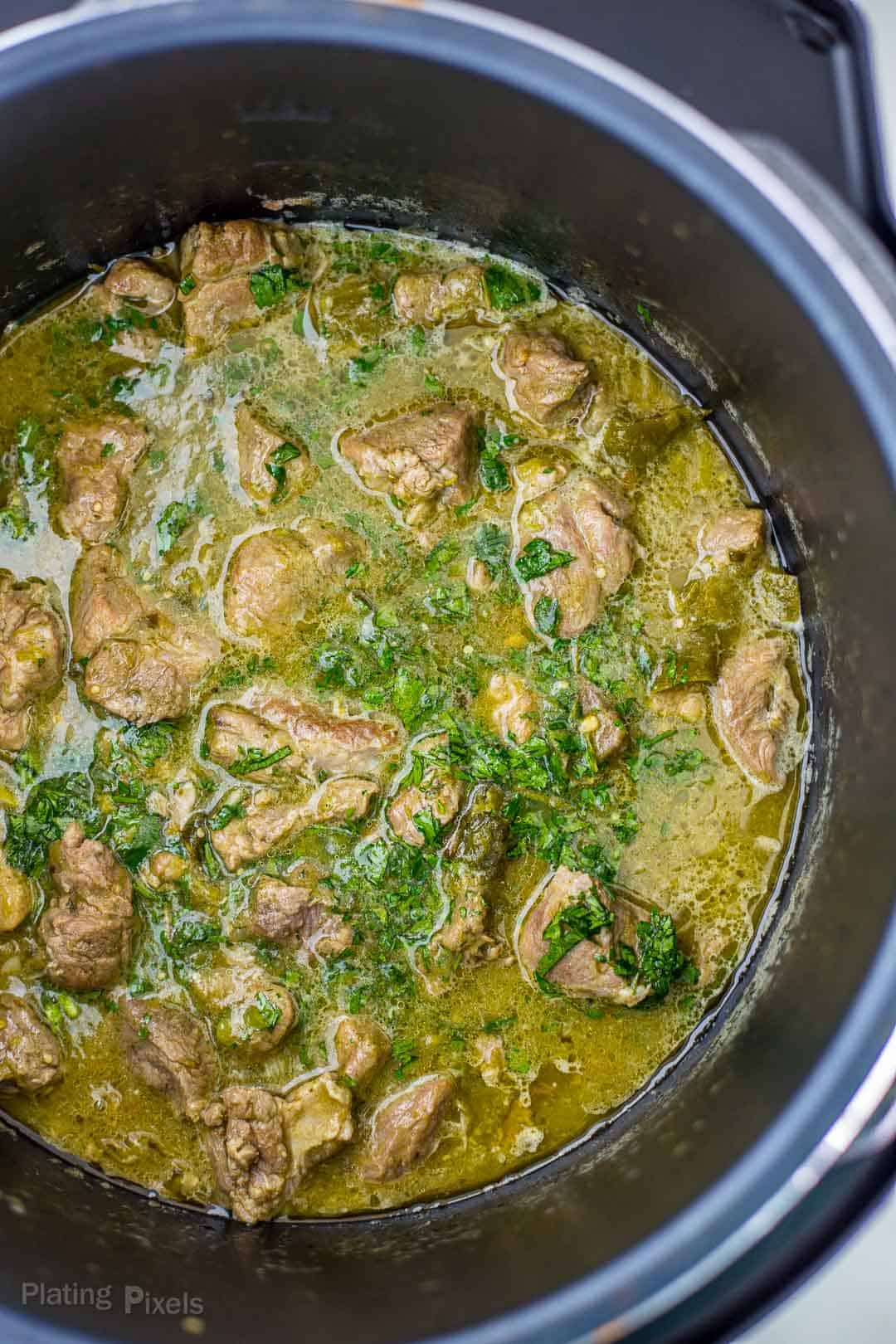 What Type of Pork to Use for Chile Verde?

Boneless pork shoulder, also known as Boston butt, is used to make Chile Verde. It comes from the shoulder region of the pig and is commonly used for pulled pork. It’s an inexpensive cut of meat that needs to be broken down to become tender.

Tips for Making this Recipe 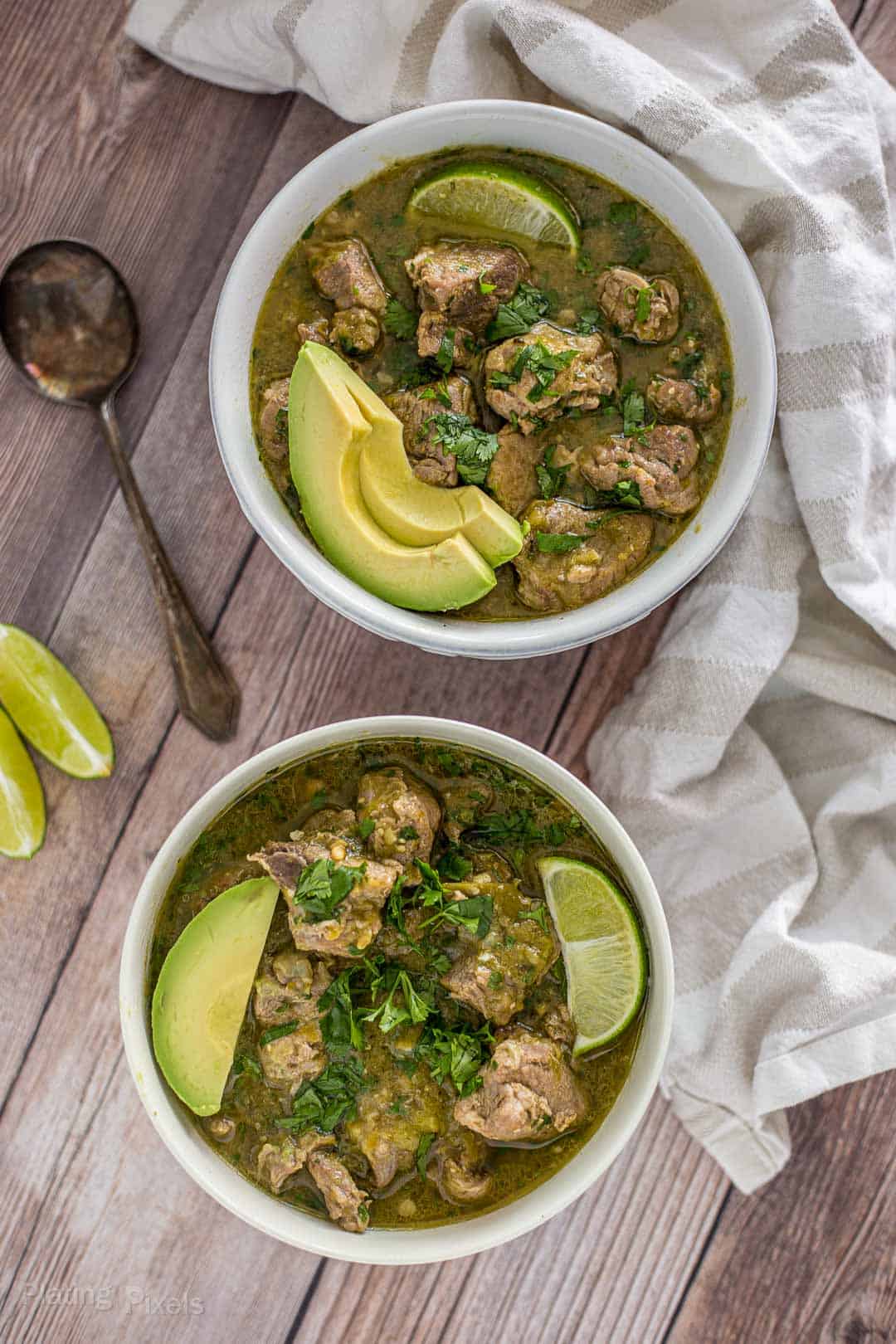 Don’t have an immersion blender to make the sauce?

Remove cooked pork pieces and let the liquid cool down a bit (this prevents steam build up while blending). Transfer liquid with vegetables to a high-speed blender. Blend until smooth, then return to the pressure cooker.

How to Serve Chile Verde

Chile Verde Pork is wonderful on its own as a stew. Simply serve as is with avocado, sour cream or shredded cheese a garnish. If you serve this way, it’s keto and low-carb.

You could also serve with pinto beans, black beans and/or rice for a gluten-free option.

It would also be great served in flour or corn tortillas to make tacos. 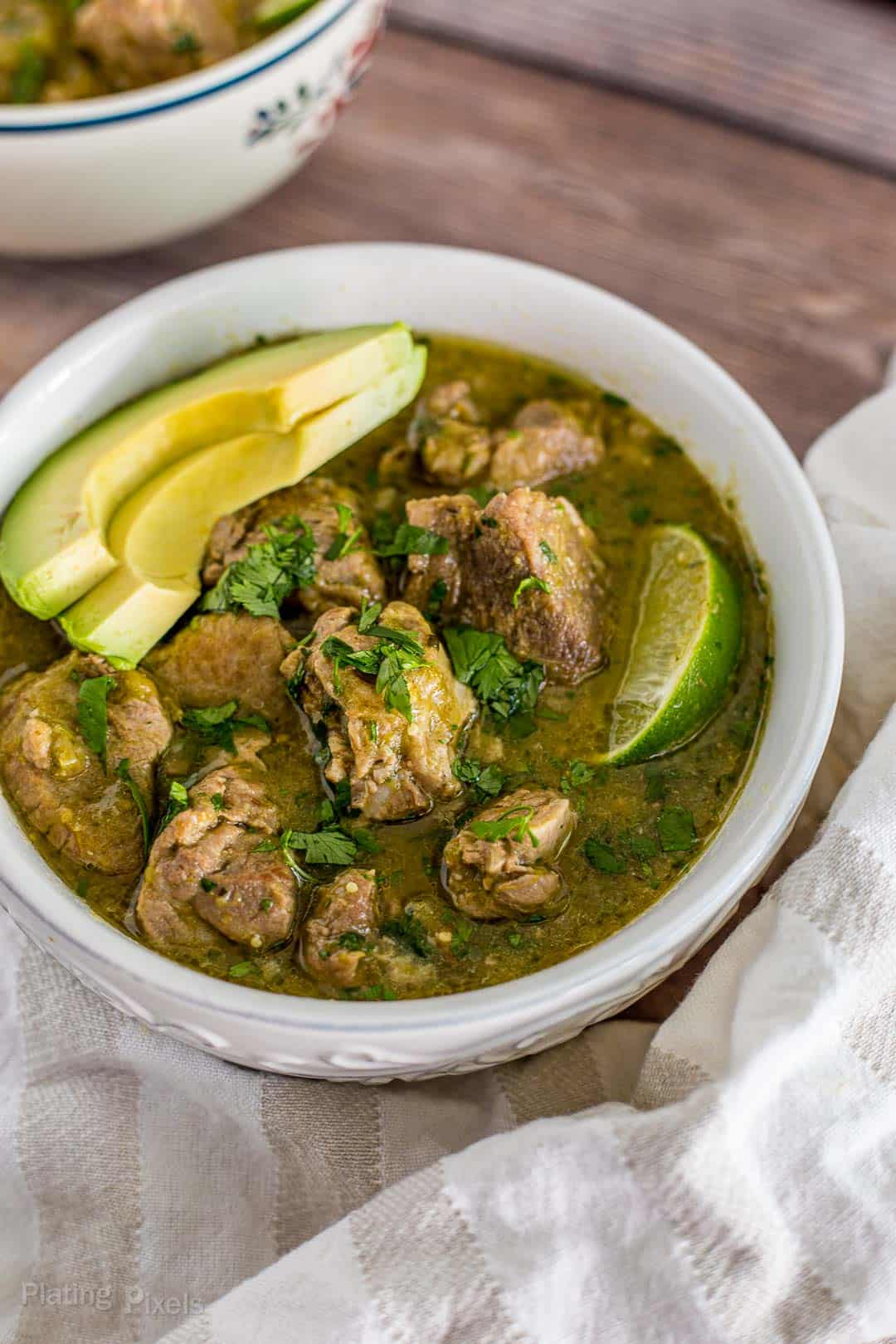 Browse all pork recipes for even more easy weeknight dinners with pork.

Serving size is 6-ounces of pork plus sauce. To save prep time: Look for pre-cut pork shoulder or ask your butcher to cut it. Shortcut method: Prepare pork shoulder as instructed, but omit the rest of the sauce ingredients. Substitute with 24-ounces of jarred chile verde sauce and pressure cook as directed. Don’t have an immersion blender? Remove cooked pork pieces and let the liquid cool down a bit (this prevents steam build up while blending). Transfer liquid with vegetables to a high-speed blender. Blend until smooth, then return to the pressure cooker.
Nutrition Facts
Pressure Cooker Chile Verde Pork
Amount Per Serving (6 g)
Calories 275 Calories from Fat 72
% Daily Value*
Fat 8g12%
Saturated Fat 2g13%
Cholesterol 109mg36%
Sodium 491mg21%
Potassium 869mg25%
Carbohydrates 7g2%
Fiber 2g8%
Sugar 3g3%
Protein 42g84%
Vitamin A 253IU5%
Vitamin C 43mg52%
Calcium 42mg4%
Iron 3mg17%
* Percent Daily Values are based on a 2000 calorie diet.
Like this recipe?Visit @platingpixels on Pinterest to discover more. Pin it with button below to save recipe for later.
Don't forget to leave a comment below and rate this recipe if you like it → 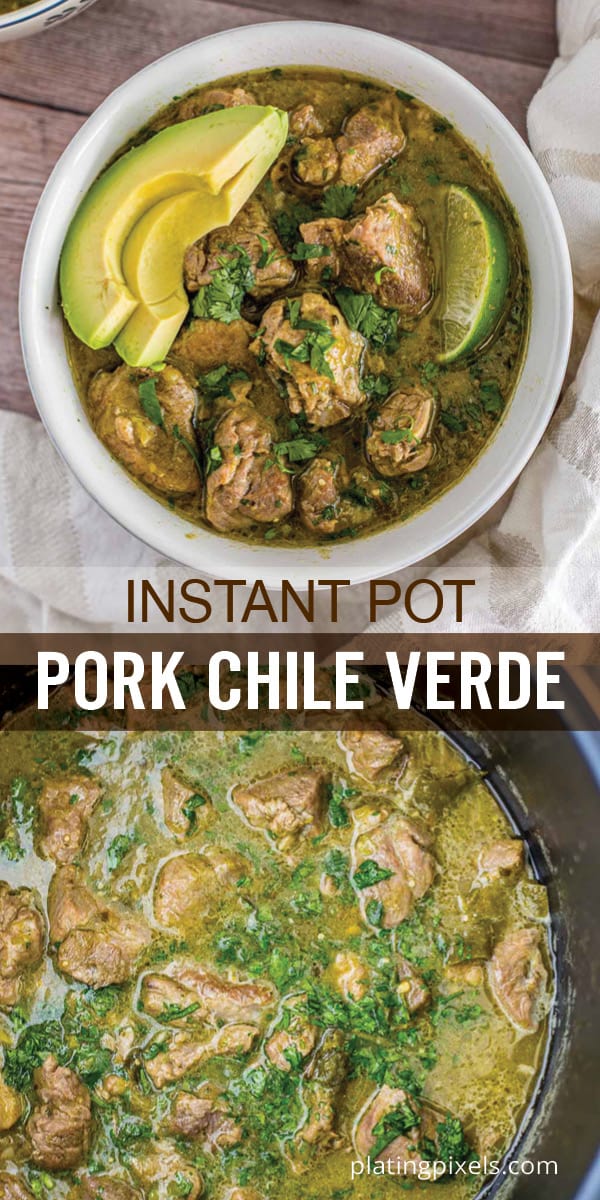 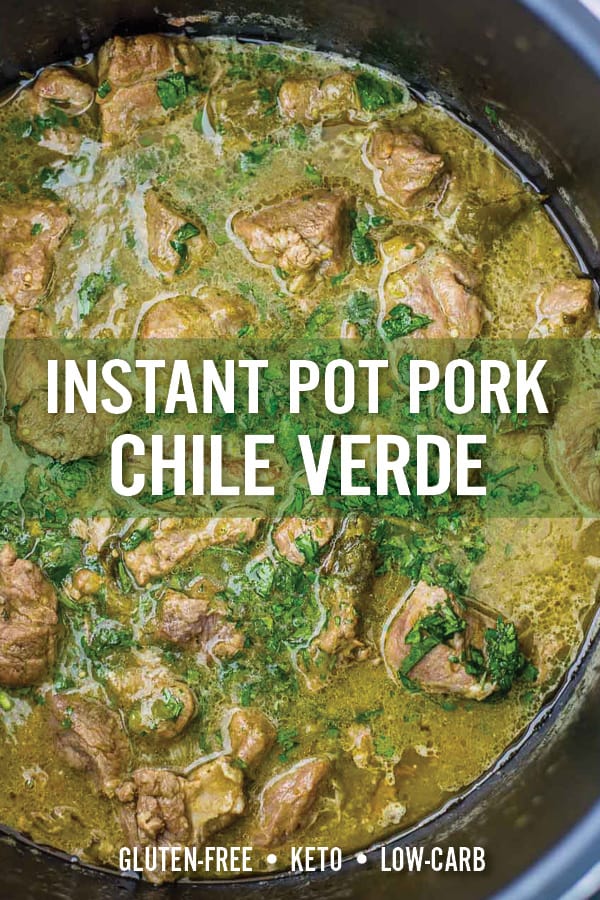